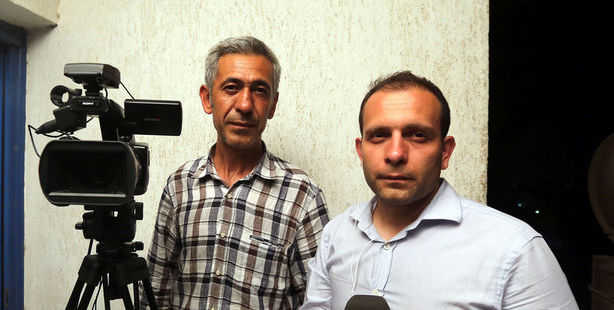 The military junta administration in Egypt has released four Turkish journalists who were detained while covering the developments.

The four Turkish journalists; correspondent Fatih Er and cameraman Tufan Güzelgün from A Haber and Star TV correspondent Murat Uslu and cameraman Zafer Karakaş, who were detained on Tuesday while covering the situation in Egypt, were released later on in the day.

Murat Uslu and Zafer Karakas from the private broadcasting channel Star TV were released first, however soon after, Fatih Er and Tufan Guzelgun who are journalists for the private news channel A Haber (A News) were also released. The journalists had been detained for reportedly lacking press accreditation. Their release came as a result of the intense efforts of Turkey's Ambassador to Egypt Huseyin Avni Botsali.

The Egyptian Army, which does not want news of the demonstrations being held in support of the overthrown President Mohammed Morsi to be released around the world, is doing everything in its power to block journalists in the region from covering the protests demanding the reinstatement of Egypt's deposed president.

Star TV correspondent Murat Uslu and cameraman Zafer Karakaş were detained by Egyptian security forces near Rabaa Al-Adawiya Square in Cairo where Morsi supporters have been staging a sit-in. Later on Tuesday, A Haber correspondent Fatih Er and cameraman Tufan Güzelgün were detained while returning from a shoot in Nasr City. The two A Haber journalists were returning from a shoot with a team from the state-television TRT when they were detained by soldiers due to a lack of accreditation by the Egypt Press Center and because they did not have press cards.

Immediately after news surfaced of the arrests, Turkey's Ambassador to Cairo Hüseyin Avni Botsalı took action to secure the journalists' release by way of holding a series of intense negotiations with Egyptian officials. As a result of Bostalı's extensive efforts, Uslu and Karakaş from Star TV were released first followed shortly after by the release of A Haber's Er and Güzelgün.

After his release, A Haber Editor Er explained his experience by stating the following: "They blindfolded us and took us by car to an unknown location. They asked us why we were in Egypt."

Star TV cameraman Karakaş stated, "They claimed that I did not have a work document and detained us. They put us in plastic handcuffs and took us to a place that was 15 minutes away."

Star TV correspondent Uslu added that the individuals who detained them were in plainclothes. Uslu also added that they were not subjected to cruel treatment.

'Do not take sides and embrace all Egyptians'

The interim military administration called in Turkey's Ambassador to Cairo Hüseyin Avni Botsalı following Turkey's open acknowledgement of the military coup which resulted in a regime change in Egypt.
At the ministry, Turkey's Cairo Ambassador Botsalı was relayed the following message by the current regime in Cairo: "We are expecting statements made by Turkish dignitaries regarding the developments in Egypt to be impartial. Our expectations are for statements released by dignitaries to be done so in a way that embraces all Egyptians."

During the meeting, the unease felt by statements made by Turkish officials was emphasized and Ambassador Botsalı was warned, "This could harm relations between the two countries."
Meanwhile, Egyptian Foreign Affairs Minister Muhammed Amr has paid a second call to Davutoğlu since Morsi's deposition. Davutoğlu supposedly reacted when Amr attempted to discuss the issue of the Egyptian army opening fire on Morsi-supporters.