The story of how Turkish journalists were detained Egypt 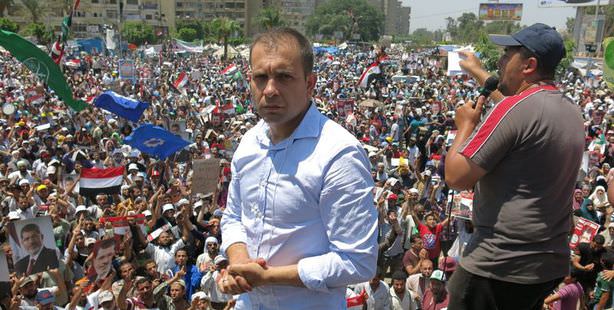 Fatih Er provides a first person account of how he and a colleague as well as two other Turkish journalists were detained in Egypt on Tuesday. "Me and my cameraman colleague were detained in Rabaa Adawiya Square and were blindfolded and taken to another location. They kept asking us, ‘Do you work for the Turkish army?”

We were detained by soldiers in an area nearby the Rab'a al Adaweya Square in the Egyptian capital of Cairo. I asked soldiers there whether we could shoot, however when they responded negatively we got into our car and wanted to leave the area however all of a sudden soldiers jumped over the wire fence and grabbed my cameraman Tufan Güzelgün by the arms and began dragging him to where the soldiers were posted. It was obvious they were uncomfortable with us watching the pro-Morsi protests. Two other soldiers ran towards me and my host and said the commander was calling for us. The ranking soldier was explaining something to our host as he took us to the area where the armored vehicles were parked. After he looked at our passports and documents, he said "These are invalid. I am going to be arresting you. They will be coming for you soon." He confiscated my belongings and our passports and told us to turn around and face the wall and wait.

After waiting 45 minutes, armed civilians had us get into a civilian jeep. They blindfolded us and pushed our heads down. We travelled for approximately four to five kilometers then my friend and I were taken to separate rooms. They were constantly hailing directives at us. Someone ordered us to turn our faces to the wall and to wait standing without moving.

Every two minutes one of the civilian officers would come in and ask, "Why are you here?" Then he would leave the room again. Some didn't even wait for us to answer. Later a polite official came in and untied our blindfolds, apologized and said we could sit down. Meanwhile, he kept insistently asking, "Do you work for the Turkish military?" I responded by saying that I haven't served my military duty. They were constantly speaking with the Egyptian Embassy in Turkey. Because they knew that I had reported on the news of fire being opened on people praying in front of the mosque for SABAH, they asked me, "Are you a television reporter or a journalist?"

A little later, they brought my cameraman colleague into the same room as me. An official carrying a notebook took notes of our identity information and left us alone in the room again. Another intelligence office who entered the room asked if we were citizens of any other nations. I said "No." He then turned to me and said, "Tell me the truth. We know you speak English and we know you also speak Arabic. You must be lying." I insisted, "I am a Turkish citizen and I don't speak good Arabic," however they continued to drill me.

WHY DID YOU LIVE IN ISRAEL

Another main focus of the intelligence officers I had to deal with was the fact that I have lived in Israel for an extended period of time. Despite the fact that there were no entry or exit stamps to Israel on my passport, they still asked me why I lived in Israel. I told them I was assigned there and that I spent three years in Jerusalem with my family. Even though I gave the same response each time they asked, they continued to probe me regarding Israel. Once the questioning was over we were made to wait in an empty room. We wanted to go to the restroom. Even though we pounded on the door insistently, our request was only responded to an hour later. After being detained for six hours, we were returned all of our belongings and we left the building. We had no idea where we were and we realized later that the building was only half constructed. After a long walk, we got into a taxi from the main road and returned to our hotel.

The two journalists from Star TV that were arrested before us, Murat Uslu and cameraman Zafer Kararkaş, were asked different questions. Their interpreter was beaten with the camera monopod and they were handcuffed. Intelligence officers asked them what they thought of the Gezi Park protests and whether or not they approved of Erdoğan.

This is a translation of an article originally written by Fatih Er.