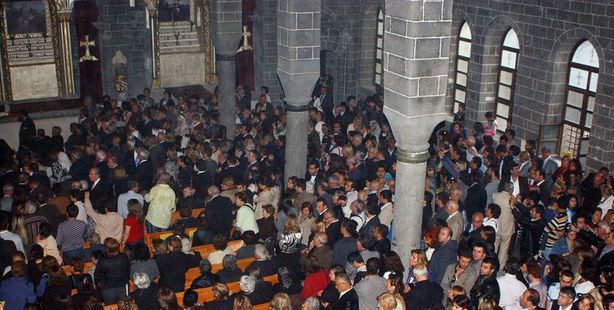 Seventeen properties originally Armenian-owned have been returned to the Surp Giragos Armenian Church Foundation in Diyarbakir. Foundation President Ayık expressed that they were pleased with the move as a start, however, he added, efforts are still ongoing to reclaim 173 properties.

The historical Surp Giragos Armenian Church in Diyarbakir, which fell into ruins in 1915 due to non-use, was reopened to services last year after undergoing renovations beginning in 2009.

During the renovation work on the 400-year-old church, an inventory listing 190 properties belonging to Armenians who deserted Diyarbakir between the years of 1910-1921 was uncovered. The church foundation, which operates in conjunction with the Patriarchate in Istanbul, has since determined the current property locations areas for the various land, residences and sanctuaries listed and have applied to the Diyarbakir District Foundations Directorate for their return. The Foundations General Directorate has established that 17 properties, totaling 15,000 square meters which are located along the borders of Sur, once belonged to the province's Armenian residents. The return of the remaining 173 properties has not yet been approved. According to the information obtained, the title deeds presented by the church foundation in regards to the return of property are said to be from the Ottoman era prior to 1910. The Foundations General Directorate has rejected the initial request for the properties' return due to the fact that the records presented are both antiquated and insufficient and has requested the foundation provide current records.

Surp Giragos Armenian Church Foundation President Vartkes Ergün Ayık commented on the ongoing efforts by stating, "We have been able to register 17 of the 190 properties as belonging to the foundation in today's history. We are extremely pleased with this as a start. However, some of these properties are currently occupied. There are illegal buildings and even public buildings that have been built on the property."

Explaining that the Ottoman title deed records for the remaining 173 properties are still problematic, Ayık said, "They were unable to determine the property ownership due to the age of the records. The records do not have the type of information required today, such as island, lot and map section details. Instead the properties we are requesting be returned have old-style records that contain explanations of the property in question such as, 'next to Kirkor's house', or 'the house across from Ahmet's which is behind Sarkisyan's land.' They have requested current information from us. We applied to the General Directorate of Land Registers and Cadastre. If they assist us, we believe we will be able to overcome the issues with the title deed records. If we are unable to reap results in this manner, then we will follow a judiciary route." Due to the fact that the property requested by the foundation is located in an area for urban renewal, the total value of the property in question is 100 million liras. It has been recorded that the value of the property which has been returned is nearly 10 million liras.

MUNICIPALITY: OCCUPIERS WILL BECOME RENTERS FROM THE FOUNDATION

Abdullah Demirbaş, the Municipal Mayor for the District of Sur, which is where the Armenian immoveables are situated, has expressed their intentions to assist the Armenian community and stated, "If there is an illegal structure on these properties, then a mutual compromise will be established. What will that compromise entail? If there is a business location or home on the land, then those who built these structures will immediately become renters from the Armenian Foundation. If the sides are unable to reach a compromise, then the issue may be taken to court. We will then follow whatever procedure necessary as determined by the court ruling."

DEMOLISHED BY CANNON FOR BEING TALLER THAN THE MINARETS

The Surp Giragos Church is located in the Hançepek Neighborhood of the Diyarbakir district of Sur, which is regularly referred to as being the "neighborhood of infidels". Built by three Armenian masters in 1729, the church was built in a manner that reflects all of the characteristics of Armenian architecture. When the church's "onion top" bell tower burned from a lighting strike, in 1883, it was rebuilt in a much more grandiose manner, reaching 29 meters in height. In 1915, the Bell Tower, which also displayed a gold cross, was demolished by cannon in 1915 due to the fact that it was taller than all of the other minarets in the city.

Surp Giragos was a metropolitan church up until the mass emigration in 1915. During World War I it was used as a German Headquarters and later as a cotton depot for Sümerbank. In time, the church became derelict with just two columns remaining in place and in 2009; with the contribution of the Metropolitan Municipality the church was renovated for five million liras and opened up to services.

This is a translation of an article originally written by Hüseyin Kaçar and Özgür Cebe.