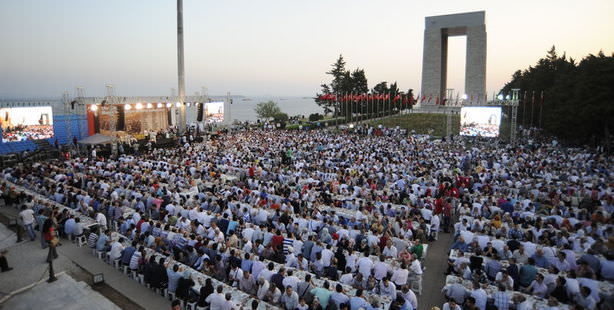 The AK Party’s Istanbul organization held a special fast-breaking dinner (iftar) for thousands on Saturday at the Çanakkale Martyrs Memorial.

The ruling Justice and Development (AK) Party hosted a very special fast-breaking meal (iftar) at the Çanakkale Martyrs Memorial on Saturday. The dinner, attended by thousands, was a very meaningful gathering to commemorate the July 13th date which marked the start of the month of Ramadan during the Battle of Çanakkale 98 years ago.

The very special dinner was also attended by 98 participants whose grandfathers were either martyred or veterans of the campaign. The menu for the meal consisted of a wheat soup, barley bread and water, which is the exact same meal the soldiers partook in nearly a century ago.

AK Party Istanbul Chairman Aziz Babuşçu told the thousands who participated, "We haven't come here to deliver any sort of message, we came here instead to receive Çanakkale's message."

The Battle of Çanakkale, also known as the Battle of Gallipoli or the Dardanelles Campaign, took place during World War I, when a joint operation by Western allies attempted to secure a sea route to Russia and to capture the Ottoman capital of Constantinople (now Istanbul). With the failure of the naval campaign to forge a route through the Dardanelles, allied troops instead landed on the Gallipoli Peninsula. After eight months of heavy fighting and high casualties on both sides, the allied troops, which included the newly formed Australian and New Zealand Army Corps (ANZACS), finally retreated. The battle is considered to be one of the greatest victories in Ottoman history.

This is a translation of an article originally written by Osman Asiltürk.