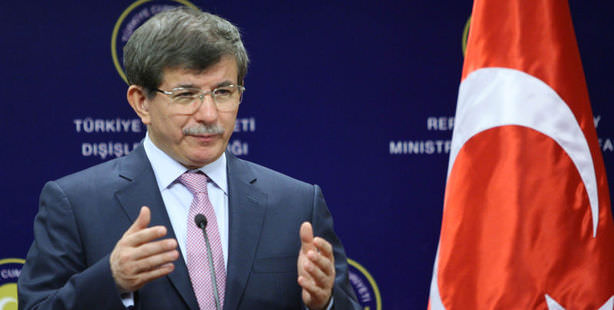 Foreign Minister Davutoğlu commented on the PYD’s intentions to declare autonomy in Syria by stating that any attempts to create a fait accompli would heed negative results.

Foreign Minister Davutoğlu commented on the PYD's intentions to declare autonomy in Syria by stating that any attempts to create a fait accompli would heed negative results.

Foreign Minister Ahmet Davutoğlu remarked on the PKK's political offshoot in Syria, the PYD, supposedly taking over the Syrian border town of Ras al-Ayn and other border posts and recent claims the Assad regime may be granting the district bordering Turkey autonomy.

WE ARE WATCHING WITH CONCERN: Speaking at a joint press conference with his Greek counterpart Evangelos Venizelos in Ankara on Friday, Davutoğlu stated, "We are closely tracking with concern all of the developments in Syria and not just with Ras al-Ayn." The Foreign Minister also said that it has been clearly established through the airstrikes on Homs and the conflict between various groups in Ras al-Ayn that the crisis not only affects security within Syria but also has negative ramifications on regional and international security while also closely affecting security in neighboring Turkey.

FIRE RETURNED ON POSITIONS: In response to cross-border firing from Syria, Davutoğlu explained, "Turkey's Armed Forces has taken all necessary precautions within the established rules of engagement and has returned fire and eradicated the positions that targeted Turkey. From here on out, Turkey will continue to respond immediately to all forms of threats by whomever, whichever group and for whatever reason that constitutes a threat against our border security."

In response to a question regarding claims that Bashar Assad may recognize the autonomy of Ras al-Ayn, a town located along Syria's border with Turkey that has been seized by the PYD, Davutoğlu stated that there are groups trying to exploit the gaps derived from the intensified conflict in Homs and the situation in Ras al-Ayn. "Any attempts to create a fait accompli or de facto situation will only increase the fragility and will result in further deteriorating the situation," said Davutoğlu.

CAUSE FOR CRISIS: Davutoğlu also mentioned that the regime may use tactical steps to pit different ethnic and sectarian groups against one another such as the Kurds, the Arabs and the Türkmen and stated that to recognize this fait accompli will only further intensify the conflict. "It would be impossible to accept any sort of de facto situation within Syria based on any one sect or ethnicity," said Davutoğlu, adding that it would lead to greater crises.

"Syria's future and what its political structure will be should be decided on by the representatives of the public from a parliament elected by the people. At this stage this is Syria's own internal affairs. However, until that parliament is formed, everyone needs to keep their distance from efforts of fait accompli and attempts to create de facto situations," said Davutoğlu.

On Friday, Foreign Minister Ahmet Davutoğlu also met with Egypt's Ambassador to Turkey Abderahman Salaheldin in Ankara to discuss the latest developments in Egypt as well as bilateral relations. During the meeting, Davutoğlu reiterated Turkey's stance towards the military coup in Egypt and stated that Turkey's attitude towards the military coup in Egypt is not against any specific group or movement but is a principled support for democracy and for the will of the people of Egypt.