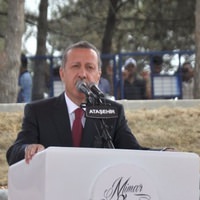 “These are the types that have placed their thoughts and opinions up for rent” said Prime Minister Erdoğan regarding the ad placed in the Times.

"These are the types that have placed their thoughts and opinions up for rent" said Prime Minister Erdoğan regarding the ad placed in the Times. "As my advisor said this is complete tactlessness" he continued. Erdoğan along with his 6 year old grandson Ahmet Akif Albayrak and his chief political advisor Yalçın Akdoğan left his house on Istanbul's Kısıklı Street and went to the Friday prayer at Ataşehir's Mimar Sinan mosque. After the prayer he visted the Ataşehir Mufti's office in the park behind the mosque, after a brief stay, Erdoğan addressed the questions of journalists outside. Erdoğan stated:

WHERE DO YOU KNOW US FROM: These are the types that have placed their thoughts and opinions up for rent. If they were the types that actually beilived in democracy, they would not have the face to call the leader of a party that was elected with 50% of the vote a dictator. As my advisor said this is complete tactlessness. Where do you know us from, how many times have you met with, Tayyip Erdoğan. What kind of a dictator is this, that at this very moment there are media groups in Turkey that say words that should never be placed in one's mouth, all sorts of curses, do (obscene) actions all sorts of actions. While they comfortably do all this, the can at this moment stand up and say media is on trial in Turkey. They say journalists are incarcerated. What sort of incarceration is this that they can comfortably make these sorts of broadcasts. The broadcasts of these types of channels are obvious. Their actions are obvious, a majority of these are fabricated news.

LEGAL ACTION WILL BE TAKEN: At this moment my necessary friends will undertake legal action on the Times issue. Legal action will also be taken on the others.

THE ELECTION THREASHOLD SHALL NOT BE LOWERED: At this moment in our time there is no design for lowering the threshold. For one, the threshold is not a law passed in our period. If there are any bans on security destabilization, whether it be in democracy or economy, if there are any bans on security destabilization the root cause of this is the lack of coalition in the government structure. Because of this we will continue with the experience lived and gained (from the past).


Translated from an article on SABAH