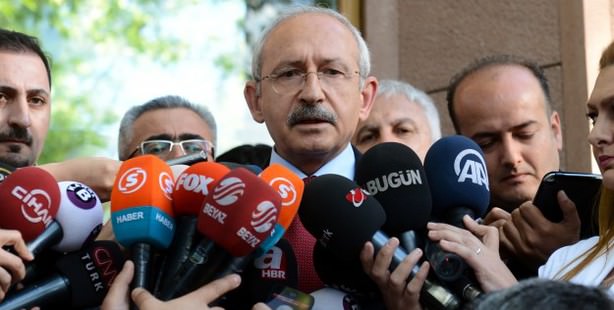 Having visited Iraq upon an invitation by Iraqi Prime Minister Nuri al-Maliki, Kilicdaroglu first had a private meeting with the minister of state for provincial affairs Turhan Mufti.

On the third day of his visit, the main opposition leader met with Iraq's Deputy Prime Minister Hussein al-Shahristani in the Prime Ministry's Undersecretary building.

Kilicdaroglu and Hussein al-Shahristani made an announcement to press members and stated that they had talked about the development of bilateral relations. Shahristani said that they underlined that the agreements between the two countries should be made between the central governments and shared their opinions about the mutual usage of the Tigris and Euphrates rivers. Iraq's reconstruction, as well as the Syrian crisis, were especially discussed by the leaders.

Kilicdaroglu had planned to also visit the cities of Najaf and Kirkuk within the scope of the 5-day visit, but could not since Baghdad officials warned him against visiting Kirkuk, news reports said. It was stated that it would be better to conduct the meetings with the Turkmen committee in Baghdad.

Prior to his departure for Iraq from Ankara's Esenboga Airport, Kilicdaroglu had stated "Our visit aims at paving the way for Turkey- Iraq relations especially in politics and economy, along with easing and helping the improvement of relations."

On the other hand, the foreign affairs representative of the regional administration in north of Iraq, Falah Mustafa, said on Thursday that Kilicdaroglu's Iraq visit would not affect relations between the Iraqi Kurdish region and Turkey.