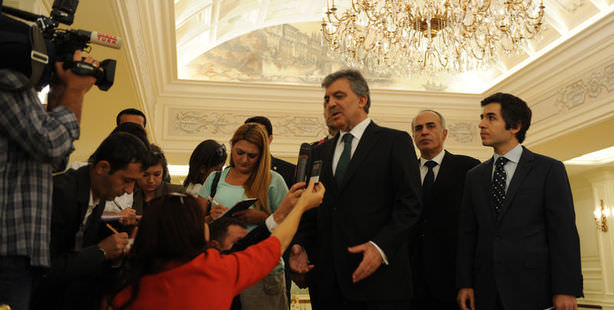 President Gül remarked on U.S. President Obama’s decision to seek congressional approval for a military strike on Syria by stating that the U.S. decision needs to be interpreted based on the nation’s own domestic policies and that sometimes Turkish and U.S. policies do not overlap.

President Abdullah Gül commented on U.S. President Barack Obama's decision on Saturday to seek congressional approval before launching any military action against the Syrian regime, which is widely accepted to have used chemical weapons on attacks, which took place on August 21 near Damascus, claiming over 1,300 lives. President Obama had said that the use of chemical weapons was a "red line" that if crossed would warrant military intervention. The U.S. Congress is scheduled to resume on September 9th.

Speaking to reporters prior to a ceremony in the capital for the handing over of Russian Federation Ambassador Andrey G. Karlov's letter of credence, Gül stated, "As a neighboring country (to Syria) of course our feelings are different. They (the U.S.) are far away and their sentiments differ. Therefore, both Turkish and U.S. policies may not always fully overlap."

In response to a question reminding of U.S. President Obama's call to leave the decision of whether to take military action in Syria up to Congress, President Gül stated the following: "Obama's decision needs to be assessed in terms of the United States' own political dynamics. Their own manner of administration, their political dynamics and internal polices seem to have pushed this decision. Therefore, that is how we need to interpret this."

When asked how consistent Obama's decision is with Turkey's views, Gül responded, "Every country, when making a decision, has their own independent way of evaluating the situation. As a neighboring country (to Syria), of course our feelings are different. They (the U.S.) are far away and their sentiments differ. Therefore, both Turkey and U.S. policies may not always fully overlap."

President Abdullah Gül hosted Russia's new Ambassador to Ankara Andrey G. Karlov on Monday at the Çankaya Palace in Ankara. Prior to Karlov presenting his credentials, President Gül responded to questions from the press on pressing current issues.