Davutoğlu warns of an increase in influx of refugees 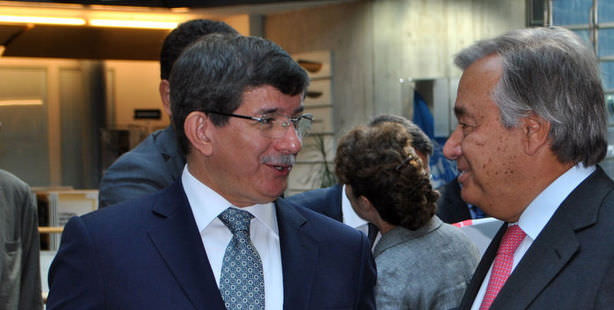 Speaking with ministers from Syria’s neighboring nations at the UN Geneva Office, Foreign Minister Davutoğlu stated, “We brought the issue to the UN because we fear an increased influx of refugees.”

Foreign Minister Ahmet Davutoğlu shared his concern that there may be an increase in the influx of refugees from Syria to neighboring countries as a result of the use of chemical weapons in the war-torn country. Foreign Minister Davutoğlu was joined by his fellow counterparts from Iraq, Jordan and Lebanon for a press conference at the UN Geneva Office after convening at the UN Refugee Agency. Drawing attention to the surge in momentum of refugees coming in from Syria as a result of the rising tension and increased violence, Davutoğlu said, "After this recent chemical attack there may be an increased influx of refugees, even though this is something we wouldn't want. It is because of our fear of this increase that we have been requesting for awhile now that the UN Refugee Agency address this issue."

FM REACTS TO A JOURNALIST

During the press conference, Davutoğlu reacted to a Chinese journalist who commented that the claims of chemical weapons having been used in Syria have not been verified by stating, "Please madam, come to our refugee camps and see the crying children."