Russian warships passes through the Bosphorus 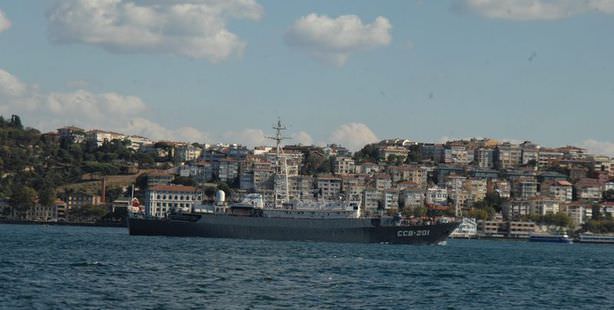 Four battleships belonging to the Russian Navy have traversed through Istanbul’s Bosphorus Strait en route to the Eastern Mediterranean.

Four battleships belonging to the Russian Navy have traversed through Istanbul's Bosphorus Strait en route to the Eastern Mediterranean.

The Russian Naval Forces reconnaissance ship CCB-201, the Priazovye SSV-201 spy ship and two destroyers, namely the Minsk and Novocherkassk, traversed from the Black Sea to the Marmara Sea Thursday afternoon, passing through the Bosphorus Strait. The ships then crossed through the Çanakkale Strait early Friday morning to proceed to their Eastern Mediterranean positions.

Kremlin Chief of Staff Sergei Ivanov has announced that Russia has been sending vessels to the Mediterranean to assist in a possible evacuation of Russian citizens from Syria in the case of potential military intervention.