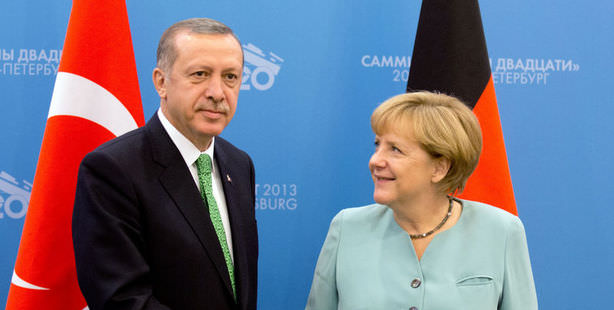 Although Prime Minister Erdoğan met with U.S. President Obama shortly on Thursday, the two agreed to meet for a second time on Friday. Deputy national security advisor for strategic communications of the White House Ben Rhodes announced on Friday that President Barack and Obama and Prime Minister Erdoğan met earlier in the day on the sidelines of the G-20 summit to discuss the crisis in Syria. In his statement, Rhodes acknowledges that Turkey has been a very strong supporter of the notion that the Assad regime must be held accountable for its use of chemical weapons. "Similarly, we've coordinated very closely with Turkey in our support for the opposition within Syria, and we'll continue to do so going forward," Rhodes said. "So they had a good discussion on Syria, and we feel quite aligned with Turkey in our approach to the issue."

MEETINGS WITH MERKEL AND KI-MOON

Prime Minister Erdoğan also met separately with United Nations Secretary General Ban Ki-moon and German Chancellor Angela Merkel. The meetings lasted around 45 minutes each and were closed to the press.

UN Secretary General Ki-Moon briefed Prime Minister Erdoğan on the UN mission's chemical weapons investigation in Syria. Recent developments in Syria and the international community's reaction to the issue of chemical weapons use were said to be the focus of the meeting. At one point, Ki-moon asked Erdoğan if he slept all right, and Erdoğan jokingly responded "just as well as you did."