Erdoğan: "Olympics to be a message for our region longing for peace" 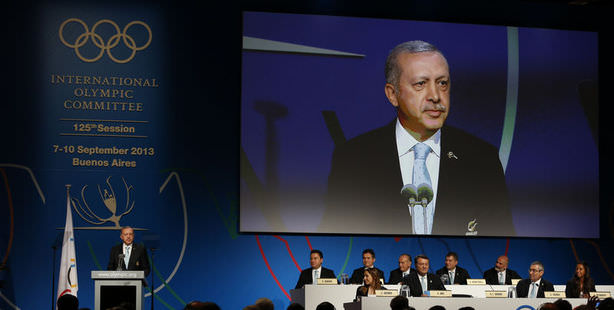 Led by Prime Minister Erdoğan, the Istanbul delegation has completed their final presentation for the city’s bid to host the 2020 Olympics. "The Olympics will be a message to our region which has been longing for peace," Erdoğan told the International Olympics Committee on Saturday.

"We are in a period in which our region and the world longs for peace. We would like to send a strong message of peace to the entire world from Istanbul, which is a city of harmony and brotherhood, at such a critical time," said Erdoğan referring to the crisis in Syria. "We would like to send a warm and sincere message with the Olympic flame from Istanbul, a city of tolerance, a city which embraces all languages, religions and all ethnic origins. Istanbul will be bridge that brings past and present, continents, cultures and civilizations together," he said. "Let's establish this bridge together and make history."

Turkey is ready to turn Olympic dream into a reality

Turkey will find out on Saturday if Istanbul has been selected to host the Olympics in 2020. "We are ready to turn our 20-year Olympic dream into a reality," says Istanbul Bid Chairman.

The International Olympic Committee (IOC) convened today in Buenos Aires, Argentina where they witnessed the final presentations from candidate cities Istanbul, Madrid and Tokyo after which the decision of which city will host the 2020 Olympics will be determined by a vote Saturday evening. Flying in from Russia, where he attended the G-20 summit, Prime Minister Recep Tayyip Erdoğan lead Istanbul's bid delegation in its final presentation and question and answer session.

Chairman of the Istanbul 2020 Bid Committee Hasan Arat is optimistic about Istanbul's fifth bid, stating that over the past several years the city has seen the development of new venues and infrastructure improvements. Istanbul has the biggest chance among the other candidate cities to host 2020 Olympic Games, said Bid Chairman of Istanbul 2020 Hasan Arat at the final press briefing ahead of the bid's presentation IOC in Buenos Aires on Saturday.

"This is a new bid for a new Turkey. Now, after a decade of economic growth, and with the full support of the government, the private sector, and the people of Turkey, we are ready to start turning our 20-year Olympic dream into a reality," said Arat speaking to local and international media on Friday. "We are on the last stretch; these are the last days, last minutes. Everything is very important," said Arat hopeful that the presentation, by the delegation headed by Prime Minister Erdoğan, will draw away votes from rivals Japan and Spain.

Arat stressed that 94 percent of the Turkish public supports Istanbul's candidacy in the 2020 Olympics and said, "We are optimistic that the IOC will choose to make history by selecting Istanbul for 2020." Highlighting the fact that Istanbul is situated on two continents, Arat said, "Istanbul 2020 will be held against the backdrop of one of the most magical cities on the planet: a city which has been a bridge between continents, cultures and generations for thousands of years. Istanbul 2020 will put athletes and the Summer Games at the center of the most spectacular stage in Olympic history."

Istanbul Metropolitan Municipality Mayor Kadir Topbaş also said they felt the full support of the Turkish public in the ongoing process of Istanbul's candidacy for the 2020 Olympic Games. Topbaş also extended his gratitude for all of the contributions made by Prime Minister Erdoğan as well as other authorities, businessmen and non-governmental organizations. "All of our expectations and hopes that Istanbul will be a hosting city for the international Olympic Games will come true at last," said Topbaş speaking to journalists in Buenos Aires Friday.

The decision will be made by International Olympic Committee (IOC) on the first of a three-day meeting in Buenos Aires. Both Turkey's rivals for the Olympics; Japan and Spain, have hosted the games before, Tokyo in 1964 and Barcelona in 1992. With four previous bids to host the Summer Games, it may be in Turkey's favor that the country has never been selected to host the games. If the city wins the bid, Turkey would be the 24th nation to host the Olympic Games. Istanbul's bid is highlighting that if selected, the city would be making history for being the first in its region, the first in a city linking two continents, the first in a predominantly Muslim nation as well as the first host country to host with nearly half the population under the age of 25.

All three cities present their bids to IOC members today, with Istanbul first up, followed by Tokyo and then Madrid. Each city is being represented in person by leading statesmen. Prime Minister Recep Tayyip Erdoğan led the Istanbul bid delegation, Japanese Prime Minister Shinzo Abe will represent his capital city and Prince Felipe of Spain is part of Madrid's official presentation. Following the candidate cities' final presentations, IOC members will then hear a report from an internal Evaluation Commission formed of IOC members and Olympic experts, before voting begins.

A total 97 members are expected to vote twice tomorrow. The voting, held by secret ballot, will begin at 21:45 Turkish time. Should a city not obtain an outright majority of votes, the candidate with the least votes will be eliminated and the two remaining cities will go head to head in a second round. At 23:00, the delegations for the two final cities will be invited into the hall for the IOC President to announce the winning candidate to host the 2020 Olympics and Paralympics Games.