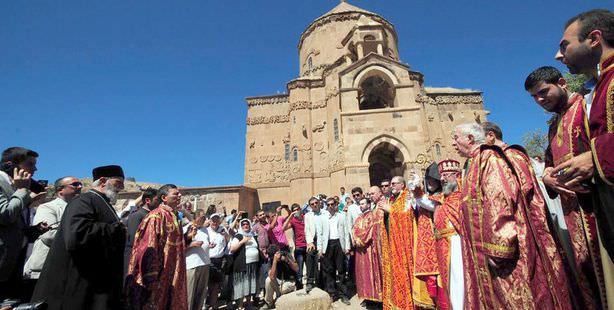 The Cathedral of the Holy Cross hosted the first Baptism ceremony held in 100 years at the restored church situated on Akdamar Island in Lake Van. The baptism ceremony took place during what was the fourth Divine Liturgy held since the church was reopened in 2010 and was conducted by Archbishop Ateşyan.

The fourth Divine Liturgy since the reopening of the 10th century Cathedral of the Holy Cross was held on Sunday. The mass also included the first Baptism held at the restored church in 100 years.

The Cathedral of the Holy Cross is a 10th century Armenian Church located on Akdamar Island in Lake Van. The church held its first mass in 95 years in 2010 after it was restored by the Turkish government. Yesterday's mass, which convened at 11:00 marked the first time a Baptism ceremony was held at the ancient church in nearly 100 years.

The Akdamar Church, located in the eastern province of Van, is opened to mass once a year, via special permission granted by the Ministry of Culture and Tourism. Six Turks and Armenian nationals were baptized during yesterday's ceremony, which was conducted by Archbishop Aram Atesyan and lasted approximately two hours. High security measures were in place on Sunday as hundreds of Turkish nationals and foreigners flocked out to witness the historical event.

The medieval 10th century Armenian Church of the Holy Cross fell into disuse in the 1920's. The church had suffered decades of looting and was in ruins and on the verge of collapse when the Ministry of Culture and Tourism initiated a restoration project upon order by Prime Minister Tayyip Erdoğan. In 2007, the historical church was reopened as a museum and since 2010, an annual mass is held every September.