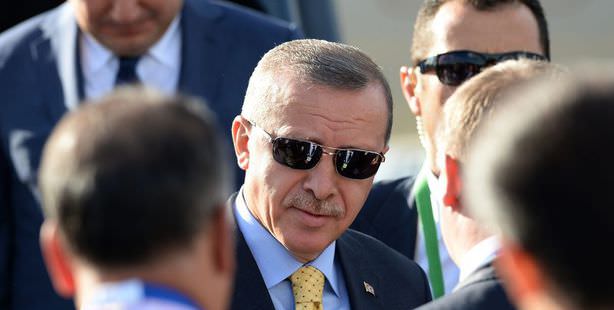 According to the latest surveys conducted ahead of the local elections, the ruling Justice and Development (AK) Party has over 50 percent of voter support throughout Turkey, says Prime Minister Erdoğan adding that as a result of the solution process, support for the ruling party has soared up to 55 percent in the Southeast.

Prime Minister Tayyip Erdoğan responded to questions from reporters accompanying him on his return flight to Turkey from Argentina, where he attended the 2020 Olympics voting in Buenos Aires after attending the G-20 summit in St. Petersburg, Russia.

Prime Minister Erdoğan discussed two main items on Turkey's agenda: namely the upcoming local elections and the ongoing solution process for which he emphasized that the negative messages coming in from the pro-Kurdish opposition Peace and Democracy Party (BDP) wing do not pose a serious issue. On Monday, Erdoğan explained that as a result of the public support for the solution process, the AK Party's voter support in the Southeast region has soared from 35 percent up to 55 percent, and added that this may be discomforting for the BDP.

The following are a series of excerpts from Erdoğan's responses to journalists' questions on the national agenda:

A BOOM OF VOTES IN THE REGION

* According to surveys conducted in all 81 provinces, the AK Party has a strong standing in the southeast, said Erdoğan, adding, "The BDP appears to have 35 percent of voter support, while the AK Party has 55 percent. Prior to the 'solution process, AK Party's support had wavered all the way down to 35 percent. Of course, some people are uncomfortable with this. Contradicting announcements have been made by Kandil (the PKK's administrative wing) and BDP. They seem to be playing good-cop, bad-cop."

Prime Minister Erdoğan explained that their efforts to formulate a reform package using the reports presented by the Wise Persons' Commission as guidelines continues and stated, "I don't presume that there will be serious challenges to the solution process. What matters most is the fact that the public wants it to continue. "

Acknowledging that there have been new recruits to the terrorist organization, Erdoğan said that it is also propaganda. They may be trying to use this timeframe leading up to the local elections as a period of activation. This is how the KCK surfaced. They began using the legal provisions of municipalities in illicit ways. The judiciary then intervened," said Erdoğan.

"Our local election rallies will continue," said Erdoğan adding that they place high importance on holding rallies in metropolitan municipalities, which they will complete first. The Prime Minister also shared that they will be announcing the mayoral candidates soon after they complete evaluations on the results of a public survey held in all 81 provinces. "We will name the candidates after we conduct a tendency survey," explained Erdoğan.

According to current poll results, the AK Party has garnered wide support for the local elections, said Erdoğan announcing that at present they have 50 percent of voter support. When the mayoral candidates are announced the rate of support may rise even further, added Erdoğan.

"We may be even name candidates amongst our colleagues who have served three terms. This is an ordinary situation. We may also nominate our deputy and ministerial colleagues from certain provinces. If a deputy is nominated for a mayoral position they do not have to resign, however if a minister is nominated, then they do have to resign from their position which of course poses a risk. However, we have to take that risk, some provinces are just worth it," said Erdoğan.