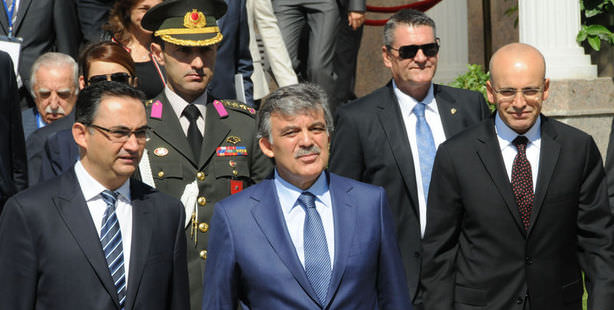 President Gül stressed the importance of the Syrian regime completely handing over its chemical arms arsenal, but said that the move should not be just a delaying tactic.

As the Syrian regime has agreed to abide by a Russian plan for the surrender of its chemical weapons, President Abdullah Gül stressed the importance of the move being an actual overall disposal of their stockpile and not just a tactic for delay.

President Gül responded to reporters' questions following the opening of the International Forum on Financial Systems being held in Istanbul. "It is an important development that chemical weapons in Syria be disposed of completely. We would be pleased with this. However, the handover of weapons should not be a tactic, but an overall disposal," Abdullah Gül told reporters in Istanbul.

Gül said that Ankara is well aware that Syria has a large stockpile of chemical weapons and expressed that their eradication was crucial, however, he stated, "There is a second dimension to this situation and that is that the issue is not solely about chemical weapons. The U.S. must not solely approach the issue from this standpoint. This is a country where over 100,000 people have been killed as a ruthless civil war ensues. This is a country where people and its cities are being destroyed. This absolutely needs to be stopped."

Referring to the need for a political solution to the situation in Syria, President Gül said that the handing over of weapons will not mean the objective has been served. "I have always felt that a real political exit strategy is needed to end the civil war in Syria. Therefore, we need an exit strategy in the true meaning and one in which all together we can put an end to the civil war in Syria and establish a situation in which people can return to their country and begin to live their lives as normal. It is really worrying that no exit strategy has been presented yet," said Gül.

President Gül also touched on the death of Ahmet Atakan, a 22 year-old protester, who passed away after he fell down from a building in the Turkish southern city of Hatay, and said, "The loss of a life is not taken lightly. It is very heartbreaking. A thorough investigation will be held into the event and the results will be announced publicly."

Atakan's death came as an unauthorized demonstration was held in Hatay on Monday to protest the building of a joint mosque and cemevi in the Tuzlucayir district of Ankara and of the deaths during the Gezi Park demonstrations. Witnesses and activists claimed that Atakan was hit in the head by a gas canister used by the police. However, video footage has emerged showing the moment when Atakan fell off the building.

When asked to comment on Istanbul's losing out to Tokyo in the final vote on the bid to host the 2020 Olympics, Gül stated, "Of course we were disappointed, however, everyone did everything that they could. In the end, in any race there is a winner and a loser. All of the activities that took place during this process were to our advantage. Turkey and Istanbul were promoted in the best way possible. None of the efforts we made were in vain."