Erdoğan questions why civilian actors are not being tried for Feb. 28 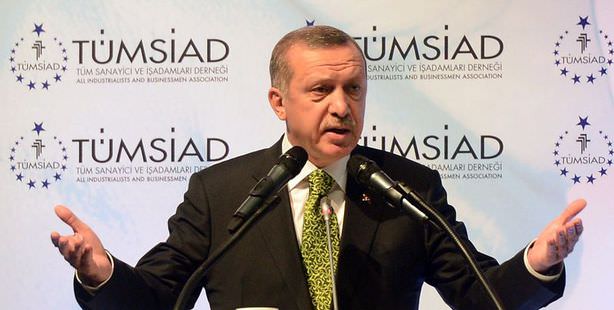 Prime Minister Erdoğan questioned why civilian actors of the February 28, 1997 ‘postmodern’ coup are not being called to trial for their involvement in what eventually led to the demise of the Erbakan government. “Didn’t the nation’s capital-holders, and written and visual media contribute to the process,” asked Erdoğan.

Speaking at an International SME Council meeting held by the All Industrialists' and Businessmen's Association (TÜMSİAD) on Thursday, Prime Minister Recep Tayyip Erdoğan offered up his assessment that the civilian contributors that influenced the February 28th, 1997 military memorandum which led to government's resignation must also be held accountable.

"Today is the 33rd anniversary of the September 12, 1980 military intervention. Unfortunately leading up to Sept. 12, Turkey wasted all that it had gained; its experience, energy and youth. Turkey actually paid the greatest price long before the September 12 intervention, during the May 27, 1960 coup. The Sept. 12, and Feb. 28 coups are in fact attempts to revive and fortify what happened on May 27", said Erdoğan.

The Prime Minister stated that the dark shadows of the May 27, 1960 coup have yet to pass over Turkey and added, "Those who are out on the streets today wielding Molotov cocktails, need to first be well informed of this. If this dark history of ours is forgotten, then it will be repeated" said Erdoğan, pointing out that the protesters today were not around during the 1960 coup. "However," he said, "if one takes a close look at what is happening today, they will see that it is precisely reminiscent of what transpired in the days leading up to the May 27, 1960 intervention."

EVEN THE HEADLINES ARE THE SAME

Prime Minister Erdoğan said that he has conducted an archive research of headlines released by certain media groups precluding coups of the past and that they are reminiscent of those being released now. "It is as if those who are releasing headlines today went into the archives of the headlines released then, and have gone ahead and used the same headlines. If you look back at the timeframe leading up to the September 12, 1980 coup, during the era when the coup was being prepared to be staged, you will see that what is happening now is what happened then and that the same headlines and the same statements are being released. Just like how today they say to us, 'the poll booths are not everything', they said the same to the late Menderes," said Erdoğan adding that the lies being circulated today are the same lies that were spread at that time.

WE HAVE UNLIMITED RESPECT FOR LIBERTIES UNDER LAW

"We have unlimited respect for liberties within the bounds of law. However, in the case of illegal meddling into other individuals' freedoms then we will use the authority they vested in us by law as well as our security forces. No one has the right to disrupt the welfare and peace of this nation," stated Erdoğan.
Prime Minister Erdoğan emphasized that the majority will always respect and protect to the end the rights of the minority. "However," he said, "The minority's attempts to create chaos in Turkey will never reap success. Whatever your issue is, we will solve it first through the elections and secondly through discourse, consultations and compromise."

"We have managed to erase all of the traces of the May 27 tutelage in every area but one. I want to openly express to you our failure in this one area and that is we have been unsuccessful in changing the mindset of the opposition and of current opposition parties. Just take a close look at the opposition and you will see that they still carry the shadows and the dust of the 1960, 1980 and 1997 coups," said Erdoğan.

The Prime Minister then asked, "Didn't the nation's capital-holders, and written and visual media contribute to the process?" Expressing that he was surprised they have not been made to stand trial, Erdoğan stated, "I am curious why it is that they are not being held accountable for their contribution to the Feb. 28th intervention."

Prime Minister Erdoğan also mentioned a trip paid by the main opposition Republican People's Party (CHP) on the 33rd anniversary of the September 12, 1980 coup and stated, "By paying a visit wishing good luck to an administration which has recently staged a coup, they are recalling the Sept. 12th coup with great enthusiasm and solidarity."

Erdoğan said he finds it interesting that the CHP has expressed that this trip was intended to repair relations with Turkey and asked, "Under what title were you there? You could only repair relations with them with your own party if they were strained. Otherwise, what exactly is your title or qualification that allows you to be involved in officially representing a country to repair diplomatic ties? Have you been given such task?" Erdoğan went on to repeat the question, this time asking, "Under what right do you attempt to represent the Republic of Turkey, which does not acknowledge the coup administration?

Democracy package to most likely be released next week

Erdoğan also mentioned the government's ongoing efforts to finalize a democracy package of reforms in line with the ongoing resolution process by stating, "My colleagues and I spent hours yesterday working on the democracy package. Hopefully, we will discuss the final articles on Friday and then I believe most likely that we will release our democracy package in a press conference the following week."