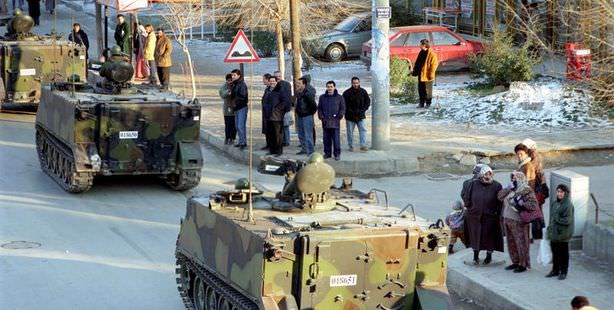 The indictment for the historical February 28, 1997 “postmodern coup” trial cites documents containing shocking details pointing to the involvement of civilian actors in the military intervention, which led to the downfall of the government at that time.

As the trial resumed on Friday into the February 28, 1997 military intervention and memorandum which led to the resignation of the Erbakan government, the 1,308 page indictment prepared by Public Prosecutor Mustafa Bilgili cites a number of documents pointing to civilian involvement and support for the pressure-induced process which resulted in the government's demise. Amongst the documents included in the hefty indictment is a document recovered in Colonel Hüsnü Dağ's residence entitled, 'Plots to be given to journalists', which includes a number of allegations to be spread against the Welfare Party and True Path Party (Refah-Yol) government.

This particular document, included in the Feb. 28 case indictment, contains information on discussions held at the General Staff headquarters and specific topics handed over to journalists and reports that supported the coup. The document lists 16 themes designed to defame the coalition government. The prosecutor has set up an expert committee to go over the 16 topics presented by the General Staff and the news reports that were released at that time. Journalists who took part in General Staff briefings or were logged in the guest book as well as other journalists who published news articles establishing the grounds for the coup, may be included in the investigation file dependent on the findings in the expert committee report.

2- Most addresses made by Welfare Party administrators and deputies contain criticism of Atatürk, Turkey's Grand National Assembly, the Turkish Armed Forces and other values attributed to the Turkish nation.

3- They do not consider those other than themselves to be Muslims and therefore feel they have the right to play any sort of game in the name of God.

4- During the one-year coalition government, they established ranks to loot Turkey in every fashion and by supporting Islamic capital; they created thousands of billionaires and trillionaires.

5-It is widely accepted by all that the actions and statements made by the Chairman of the Welfare Party in regards to Atatürk, secularism and democracy are nothing but hypocrisy and deception in the name of religion.

6-If they did not have immunity, a significant number of Welfare Party deputies would be charged and that they segmented citizens into "right" and "void" which has led to tension.

7-Welfare Party Deputies have badmouthed the Turkish Armed Forces, stating they will not be successful against the PKK by oppressing the public and that the Turkish State is discriminatory.

8- They present their objecting views of Atatürk and democracy in their publications.

9- Party administrators refuse to accept their contribution to the tension in the country and base their actions on either democracy or Islam.

10- During the Welfare-True Path Parties' government era, certain newspaper articles surfaced regarding the tension and the dangers of the secular press.

11-The approach that if the Welfare Party is closed down tension will surface is wrong and only strengthens that belief as well as creates concern for the future of democracy amongst secular circles.

12-The Welfare Party may claim that the secular segment is treating them unjustly as is the Constitutional Court and stated that the state's force is not enough to bring them down, however if they were to be shut down they fear the events that would follow.

13-Newspapers and periodicals that oppose the Turkish Armed Forces and the countries secular-democratic structure support the Welfare Party and have fundamentalist views.

14- It is clearly evident that over the past year, political Islamists have ignited a secular-antisecular divide in the nation amongst all ages and are harming the national unity.

15- It is evident that the Welfare Party respects nations under theocratic dictate such as Iran and Saudi Arabia more than others.

16-It has been established that there is an article, which states that they feel a country such as Libya is over and above the Republic of Turkey and therefore accepted assisting Qaddafi and the Islamic Command Council.