Amidst clashes on the Syrian side, Turkey shuts down Öncüpınar border 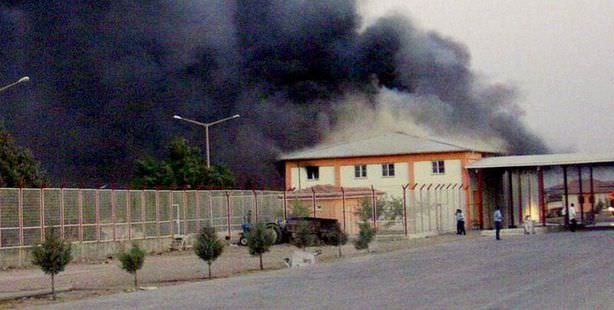 While the international community continues to seek diplomatic measures to reach a solution to the crisis in Syria, escalating clashes amongst Al Qaida militants and the Free Syrian Army along the Syrian border forced Turkey to shut down the Öncüpınar border crossing on Thursday.

While America and Russia proceed to act on an agreement for Syria to hand over its chemical arms arsenal to a third-party country for their destruction, along the border with Turkey the situation in Syria is far from resolved. Tension was said to have escalated over an attempt by the Islamic State of Iraq and the Levant (ISIS) to abduct a German doctor in Azaz, where conflict between the Al Qaeda affiliated unit and the Free Syrian Army (FSA) has escalated. Azaz, located just five kilometers from the border with Turkey and the Öncüpınar Border Crossing in Kilis, which sits opposite the Syrian Bab al-Salameh gate, was one of the first towns to be overrun by the FSA last year. Reports are coming in that ISIS is gaining control of the region as clashes continue with FSA forces. As a result, on Thursday, Turkey decided to close the Öncüpınar Border Crossing for security reasons.

Kilis Governor Süleyman Tapsız has announced that access will continue to be provided for vehicles delivering humanitarian aid to Syria. According to the Syrian Observatory, the German doctor, the abduction attempt of which is said to have ignited the recent slew of clashes, is currently in a safe location.

Spokesman for the Tawid Brigade, Ebu Firas, stated that the Tawid Brigade, the largest armed group in Aleppo, managed to stop ISIS from accessing the Bab al-Salameh gate. In the evening hours on Thursday, the FSA announced that ISIS had withdrawn from Azaz.

Meanwhile as the tension escalates along the border, NATO Secretary General Anders Fogh Rasmussen expressed on Thursday that it was crucial the military option remain on the table with Syria irrespective of the UN Security Council decision. Ahmet Üzümcü, Director General of the Organization for the Prohibition of Chemical Weapons will be putting the U.S. and Russia deal to the table at the Hague. Also on Thursday, U.S. Secretary of State John Kerry called on the UN Security Council to be prepared to act next week on Syria.