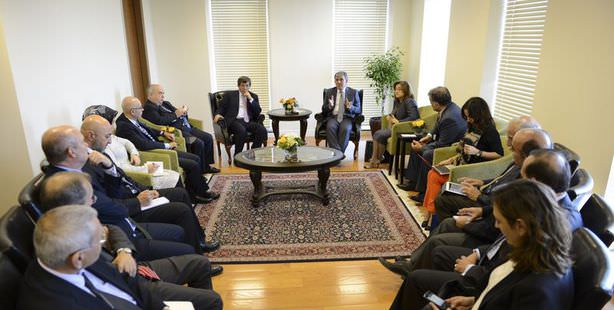 Speaking to reporters in New York where he will attend the 68th session of the UN General Assembly, President Gül expressed that Turkey will be extremely pleased by the disposal of Syria’s chemical weapons stockpile, “However,” he warned, “the situation in Syria is not solely about chemical weapons.”

President Abdullah Gül sat down with reporters in New York where he will attend the United Nations General Assembly's 68th session held from Sep. 4 to Oct. 4. President Gül expressed that Turkey will be pleased by the disposal of Syria's chemical weapons stockpile, However," he added, "the situation in Syria is not solely about chemical weapons. If they had not used chemical weapons, would what is transpiring in Syria be considered normal developments?"

President Gül expressed deep concerns of the security threat posed by radical groups on the Turkey-Syria border and stated, "This involves us on a primary level. Therefore, ever since the situation in Syria first began we anticipated these current developments and constantly issued warnings to Syrian State Leader Bashar Assad. In the beginning there may not have been terrorists or radicals, however these conditions have brought these people to this point. Even those who were unable to so much as kill an ant can reach such a point that they may resort to reciprocal violence."

Syria will be the most heated item of discussion during the UN General Assembly, said Gül adding that he will be addressing the General Assembly with a series of important messages on the situation. "The Syria issue is important for all nations, however due to the fact that Turkey is directly affected by the situation, Turkey will be the country they pay the most attention to in voicing concerns," stated Gül.

President Gül also commented on meetings planned with the presidents of Iran and France and stated, "Quite honestly, it is unrealistic to discuss the issues in Syria without Iran. France is important for being a permanent member of the UN Security Council as well as for having significant historical ties with Syria.

Commenting on Turkey's candidacy in the UN Security Council, President Gül expressed that Turkey has done significant work in the Security Council. "Due to the fact that a number of incidents are developing around Turkey, it would be beneficial for Turkey to be involved again and would serve for world peace," said Gül.

On the rocket attack in Ankara…

President Gül also commented on the recent rocket attack staged on two police buildings in the Dikmen district of Ankara. Expressing how relieved he was that no one was killed in the attack, the President stated, "The government is well aware of whom the people involved in the attack are, where they came from and where they are headed. The countries they have come from and gone to immediately made contact with us following the attack."