Davutoğlu meets with Kerry in New York to discuss Syria 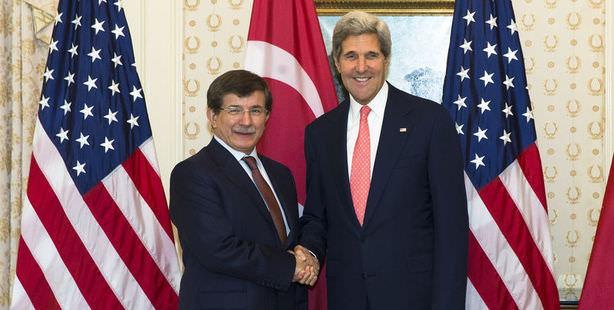 Foreign Minister Davutoğlu met with his U.S. counterpart Secretary of State Kerry while in New York to attend the UN General Assembly, which commences on Tuesday.

Foreign Minister Ahmet Davutoğlu met with U.S. Secretary of State John Kerry in New York on Monday just ahead of the start of the 68th UN General Assembly. The meeting, which heavily focused on the civil strife in Syria, lasted longer than expected and is said to be a follow-up to a recent meeting held in Paris between the foreign ministers of Turkey, the U.S., Britain and France.

According to information received from diplomatic sources, U.S. Secretary of State Kerry briefed Foreign Minister Davutoğlu on the resolution to ensure the eradication of Syria's chemical weapons stockpile. Kerry shared information regarding recent meetings held in The Hague and New York to discuss the final details of a resolution proposing the eradication of Syria's chemical weapons arsenal. Kerry is said to have gone over all of the elements they feel should be included in the proposed resolution.

Davutoğlu drew attention to the humanitarian tragedy unfolding in Turkey's neighboring country and emphasized the fact that over the past two-and-a-half years, the civil war in Syria has resulted in over 100,000 deaths and the displacement of millions. The meeting was said to have focused on the ongoing crisis in Syria as well as other Middle East developments and the transformation of the region in the wake of the Arab Spring.

While in New York, Davutoğlu also met with his Greek counterpart Evangelos Venizelos. The two discussed having special representatives from the Greek Cypriot administration and the Turkish Republic of Northern Cyprus administration leaders to pay reciprocal visits to Turkey and Greece in an effort to carve out a solution to the divided island.

"Turkey cannot be excluded from this process"

Foreign Minister Davutoğlu responded to questions on the state-run news channel TRT Haber. Asked to comment on main opposition Republican People's Party (CHP) leader Kemal Kılıçdaroğlu's criticism regarding Syria and whether he is attempting to isolate Turkey. Davutoğlu stated, "Certain people may want to isolate Turkey. However there is no way that Turkey will be excluded from this process."