Davutoğlu makes the rounds in NY meets with Rasmussen 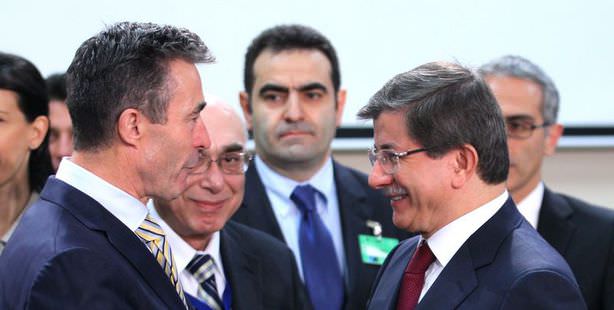 Foreign Minister Davutoğlu attended a series of high-level meetings and met with NATO Chief Rasmussen on Wednesday on the sidelines of the 68th UN General Assembly held in New York.

According to information obtained by diplomatic sources, during the meeting, Davutoğlu commended NATO's pledge to defend Turkey in light of recent developments and the measures taken within this framework and emphasized that Turkey will continue to provide effective contributions to the security of the Europe-Atlantic geography.

Meeting to be held in Istanbul on UNSC reforms

Davutoğlu also participated in a ministerial Uniting for Consensus Group meeting in New York attended by nations who share similar views regarding the need for reforms in the UN Security Council. During the meeting, a consensus was reached on the need for the UN Security Council to undergo a healthy and effective reform. It was also emphasized that current developments, including the situation Syria, that threaten international peace and security have made this need more obvious.

It was also decided that in order to ensure a new dynamic surfaces geared towards reform efforts for the UNSC to gain momentum and reap results, the group will reconvene in Istanbul at the start of 2014 to discuss all aspects of reforms.

During the meeting, the aforementioned nations reached a consensus that close coordination and cooperation is both possible and would be beneficial on a number of issues spanning from the UN Security Council, global warming and nuclear disarmament in addition to a variety of other platforms. The ministers, including Davutoğlu, agreed to reconvene in the first half of 2014 in Mexico.

Foreign Minister Davutoğlu also participated in an International Contact Group for Aid to Palestine, during which he shared Turkey's sensitivities on the situation. During the meeting, which took place at the foreign ministerial level with all donor nations including Israel, Palestine and the U.S, it was decided that international donors will increase assistance in order to support the peace talks initiated this year between Palestine and Israel.

During his speech, Davutoğlu expressed Turkey's support for all efforts geared towards strengthening Palestine's state structure. Davutoğlu reiterated Turkey's support for the restart of US brokered peace talks and emphasized that in order for the negotiations process to move forward without interruption and to reach its aim, all provocations by the Israeli side need to come to an end. Davutoğlu pointed out the harm caused by the illegal settlements within this framework and added that the moves against Haram al Sharef in Jerusalem are unacceptable.

Davutoğlu also underlined that the holiness of the Masjid al Aqsa and the freedom of worship are not only irrevocable for Palestine but also for Turkey as well as the entire Muslim world. Foreign Minister Davutoğlu also highlighted the importance of Israel first and foremost removing all occupation procedure and restrictions in order to revive Palestine's economy.