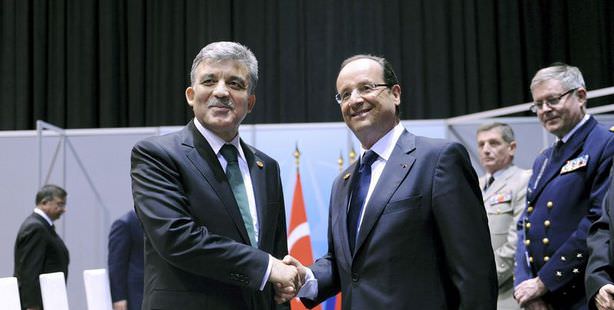 President Gül met with his French counterpart Holland on Wednesday in New York, during which they reached a consensus that the handover proposal for Syria’s chemical weapons stockpile should be contingent to sanctions and therefore turned into a UN Security Council ruling.

Currently in New York to attend the 68th United Nations General Assembly, President Abdullah Gül took the opportunity on Wednesday to meet with French President Francois Hollande on the sidelines of the meeting. The two leaders discussed the current developments surrounding Syria as well as Turkey's EU bid process.

French President Hollande shared plans to visit Turkey soon and expressed that France is in support of the chapters in Turkey's EU membership bid being opened in stages and for Turkey's accession negotiations to continue. Gül, in return, pointed out that EU membership is Turkey's strategic objective and emphasized the great importance placed as a nation on the opening of new chapters in Turkey's accession negotiations.

The two presidents also stressed the absolute necessity of transforming the proposal for the eradication of Syria's chemical weapons stockpile into a UN Security Council resolution for its power to issue sanctions.

On Wednesday, President Gül also hosted a reception at the Turkish Center in honor of the country's candidacy to become a non-permanent member of the UN Security Council for the 205-2016 term. A significant number of state leaders, foreign ministers and ambassadors from visiting nations attended the reception. During the day, President Gül took part in two meetings one of which he chaired. In an address, the president emphasized the need to put an end to extreme poverty and starvation by the year 2030.

"MY TALK RECEIVED MUCH ATTENTION"

Gül shared his observations of the response to his historical address at the UN General Assembly on Twitter yesterday. "I was third in line to speak and had the opportunity to share my views on important global issues. My talk received significant interest in the General Assembly and a number of nation representatives congratulated me on my speech as we exited," wrote Gül.

SHARING A TABLE WITH OBAMA

President Gül also attended a lunch hosted by UN Secretary General Ban Ki-moon and held in honor of delegation leaders. During the lunch, Gül was seated at the head table, which had two nation leaders each from the five geographical zones represented by the UN. Gül was joined by U.S. President Obama, who represented the West Group. While sharing a table, the two also had the opportunity to share some face time.

While in New York, President Gül also had the opportunity to meet with the presidents of Somalia, Lebanon, Slovenia, Georgia as well as with Dutch Queen Maxima.