PM Erdoğan vows they will keep the promises made 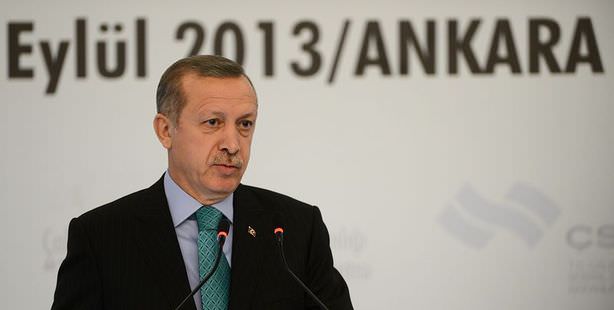 Prime Minister Erdoğan reminded that on Monday he will be revealing the details of a democracy package, which he said may include reforms that will come as a surprise to many segments of society.

Speaking at the 10th Labor and Social Security Ministry Working Assembly, Prime Minister Recep Tayyip Erdoğan reiterated his plans to announce the content of the highly anticipated democracy package, which he said, "May come as a surprise to a number of segments of society." Explaining that the package is the result of an 11-year process, Erdoğan emphasized that this will not be the end.

"On Monday, we will be announcing to the public the content of this package, which is a significant turning point in the democratization process that has been ongoing for the past 11-years. We will be realizing the promises we made as we formed our party and during our congresses in the form of this reform package. We will be committing these reforms and opening up new horizons for our nation and our people according to our roadmap and due to the conditions arising because we promised to and not through anyone's force, pressure or insistence," said Erdoğan, adding, "We will be bringing to fruition the promises we have made."

In regards to the widespread speculation in the media surrounding the package, Erdoğan stated, "Of course everyone who hears about the package engages in their speculation of what it will entail. Some are right on, however much of the speculation that has surfaced is not. Therefore, the announcement we make may come as a surprise to many segments of society. This package is the continuation of an 11-year process. However, it will never be the end. Social and political packages need to be updated constantly and we will continue to do whatever necessary to ensure Turkey's growth, be it reforms, as Turkey and our sense of brotherhood continues to strengthen."

A SOLUTION THROUGH A COMMON GROUND

Prime Minister Erdoğan emphasized the importance of sharing a common ground and common objectives in order to reach common solutions. "However," he said, "If we clench our fists we cannot shake hands. If they are holding stones, Molotov cocktails, weapons or sticks then we cannot engage in dialogue. In order to find solutions to issues we have to establish a common ground from which we can hear out one another, understand each other and be tolerant. If we took a break from shouting slogans in response to every issue and if we unclenched our fists and opened our ears and even our hearts then there is no issue that we cannot solve," said Erdoğan.

Stating that where there is violence there will only be further issues and not solutions reached, Erdoğan emphasized that democracy, political parties and the poll booths are the ways to find solutions. "Violence should never be a means to a solution. Wielding weapons, stones, sticks, Molotov cocktails and rockets will never be a method to reach a solution," said Erdogan.

Explaining that they have wanted to grant people their rights and lift all of the obstacles ever since they came into power in 2003, Erdogan explained that they were faced with great resistance. "While we were struggling for democracy and to lift the pressure on unions, there were others who worked for the perpetuation of the May 27, Sept. 12 and Feb. 28 (coup) eras," stated Erdogan.