Turkey and U.S. set up fund to combat extremism 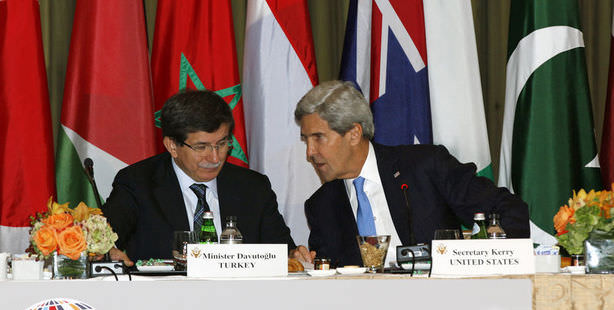 Turkey and the US have decided to set up a joint fund to combat extremism, announced Foreign Minister Davutoğlu and his U.S. Counterpart Kerry following a meeting of the Global Counterterrorism Forum in New York on Friday.

Members of the Global Counterterrorism Forum met in New York on Friday on the sidelines of the 68th UN General Assembly. The Forum, which was formed in 2011, is presided over by Turkey and U.S. and has 30 founding members including the European Union.

Following Friday's meeting, both U.S. Secretary of State John Kerry and Foreign Minister Ahmet Davutoğlu announced the establishment of a global fund to fight extremism in countries such as Somalia, Yemen and Pakistan. Called the Global Fund for Community Engagement and Resilience, the fund is expected to reach $ 200 million over the next ten years including contributions from the Global Counterterrorism Forum's members. The fund, set to be put into action by this time next year, will focus on creating resources for local projects that assist in fighting violent extremism and deterring potential recruits. Foreign Minister Davutoğlu said the forum filled an important shortcoming and stated that they have to work on strengthening laws against global terrorism.

Davutoğlu also referred to recent deadly attacks in Pakistan and a Kenyan Shopping mall, which an extremist group from Somalia killed at least 68 people including 33-year-old Elif Yavuz, who was of Turkish origin. Davutoğlu extended his condolences to Yavuz's family and expressed plans to meet them in person while in New York.