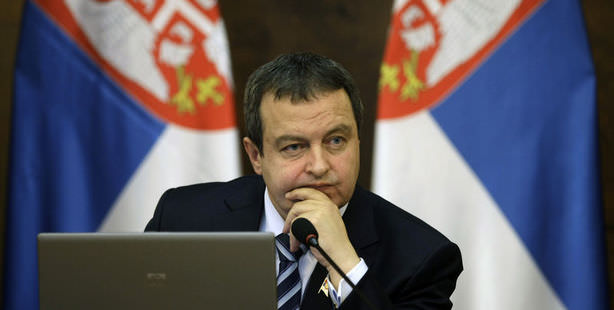 Serbian Prime Minister Dačić, who is facing hang-ups with the EU, shared his woes with Deputy Prime Minister Bozdağ who visited Belgrade over the weekend. Reminding of the battles staged between Serbia and the Ottomans in the past, Dačić stated, “By fighting with you for a hundred years we prevented your conquering of Europe. I wish we had not done that.”

Deputy Prime Minister Bekir Bozdağ had the opportunity to meet with Serbian Prime Minister Ivica Dačić over the weekend during a trip to the Serbian capital of Belgrade. During the meeting, the two shared an interesting dialogue that spanned back into the two nations' history.

A HISTORICAL CONFESSION FROM SERBIA'S PM

Serbian Prime Minister Dačić, which is currently faced with the mandatory condition of repairing ties with Kosovo in order to engage in EU negotiations, reminded of the contention that used to exist between the Ottoman Empire and Serbia years ago and stated, "In history, we prevented your access to Europe. By fighting with you for a hundred years, we prevented your conquering of Europe. I wish we had not done that and allowed you to have access. Now, if you like, you can cross over to Europe."

SHARING HIS WOES WITH BOZDAĞ

Serbian Prime Minister Dačić, who is faced with the task of repairing ties with Kosovo in order to be granted a date for EU accession negotiations, shared his woes with visiting Deputy Prime Minister Bozdağ. Just recently, Dačić had intentions of visiting the Serbs residing in the north of Kosovo who do not accept the Pristina administration. Dačić's intentions were to call on the Serbs to take part in the November 3 local elections, however his visit was hung up by the Kosovo administration. Kosovo refused Dačić's entry claiming he planned to stage propaganda during the election process in Kosovo. Sharing what he endured with Bozdağ, Dačić offered up criticism that included signals negotiations with Kosovo, which are being conducted with EU mediation, may be put on hold.