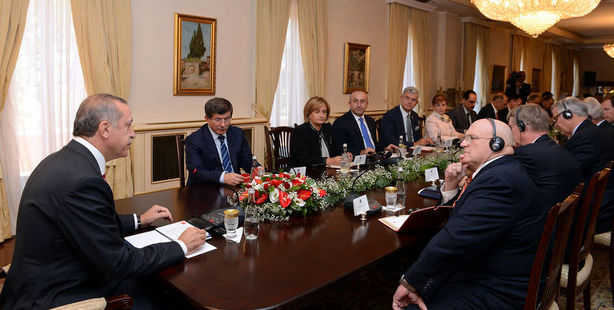 Prime Minister Erdoğan hosted the American-Turkish Council earlier in the week during which he commented on the decision to collaborate with a Chinese firm for Turkey’s missile defense system by noting that they accepted the most advantageous bid and stating, “We have to protect our best interests”.

Prime Minister Recep Tayyip Erdoğan hosted America-Turkish Council Chairman Richard Armitage and his accompanying delegation on Tuesday for a meeting held at Çankaya Palace. The meeting, which was closed to the press, was stated to have focused on the issue of Turkey's collaboration with China for the nation's new long-range air and missile defense system.

Both the United States and NATO had expressed concerns just days prior over Turkey's decision to opt for a proposal by the Chinese corporation CPMIEC (China Precision Machinery Export-Import Corp) for its FD-2000 missile system, which will be co-produced with Turkey. China's FD-2000 competed against Russian firm Rosoboronexport's S-400, the U.S. partnership of Raytheon and Lockheed Martin for the Patriot air defense system and the Italian-French consortium Eurosam's Samp-T. During the meeting on Tuesday, Prime Minister Erdoğan took the opportunity to explain to the American delegation why Turkey decided to accept China's bid. Emphasizing the fact that the Chinese proposal provided significantly advanced options especially when it came to technology-sharing, Erdoğan explained the importance of this factor for Turkey and was quoted as saying "China offered the most important and advantageous bid. We have to protect Turkey's best interests."

Prime Minister Erdoğan also noted that as a NATO member Turkey is taking NATO's concerns on the issue into consideration and supposedly stated, "To say that this system is not compatible with NATO is not right. Our technicians will be conducting assessments." Erdoğan also mentioned that there are no obstacles to Turkey purchasing weapons from a NATO-exclusive country; however, he is noted to have said, "A final decision has not been made however we have to protect Turkey's best interests. Turkey aims to reach a capacity of producing these technologies. We cannot constantly be in the position of importers."

During the meeting, Turkey's current political agenda was also discussed as Erdoğan shared the importance of the recently announced Democracy Package to his American guests. Erdoğan focused on Turkey's reformist and dynamic identity as he explained that Turkey has now reached the world's most progressive standards when it comes to discrimination and hate crimes.

The situation in Syria and Egypt were also important agenda items discussed during the meeting. Turkey's stance on both nations was reiterated while the impossibility to overlook the over 100,000 people killed in Syria with weapons other than chemical arms was especially highlighted. The delegation is stated to have expressed in return that they find Turkey's concerns to be just.