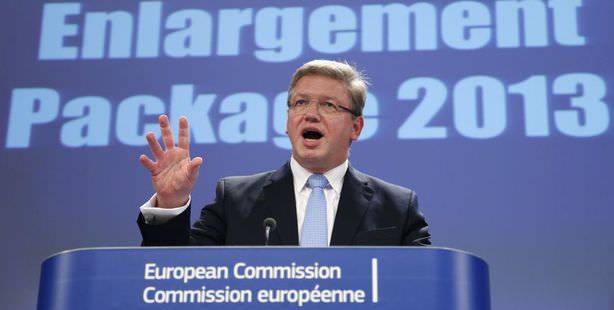 The European Commission praised the significant strides made in Turkey with the democracy package, judicial reforms and on the resolution process in Turkey’s Progress Report, which was released on Wednesday. Delivering the message, “The government continues to express its commitment to further democratization and political reforms,” the report also notes that judicial reforms will positively contribute to freedom of expression.

The European Union Commission officially released its annual progress reports to assess the progress made in countries aspiring to EU membership on Wednesday. The series of democratic measures announced by Prime Minister Erdoğan on September 30 in a democracy package as well as previously implemented judicial reforms made their mark on Turkey's Progress Report. "The government continues to express its commitment to further democratization and political reforms," stated the report, which honed in on the reforms proposed by the newly released democracy package.

The progress report on Turkey focused on the newly released democratic reforms and stressed the importance of implementing the democracy package while taking into consideration European standards as playing a key role. The progress report also devoted ample space to the third and fourth packages of judicial reforms and stated that should the reforms be compatible to European standards then it will be a contribution to freedom of expression in Turkey.

THE GEZI PROTESTS: The report also comments on the demonstrations, which erupted over a pedestrianization project involving Gezi Park and later escalated to other cities throughout the country. "Protests started against an urban development project in Gezi Park in the centre of Istanbul. The protests grew, encompassing broader demands and spreading to other cities. Overall, the demonstrations were peaceful, despite the involvement of a small number of violent protesters."

The progress report highlighted that the Gezi Park protests are evident of a growing and active civil society in Turkey. "There is a growing and active civil society in Turkey. The Gezi Park protest in Istanbul and related protests across Turkey from May-June reflected the emergence of vibrant, active citizenry." The EU also pointed out that security forces had at times used excessive force and underlined that in regards to human rights violations, certain individuals were forced to resign or undergo administrative inquiries. The report also suggested, "Turkey improve government-civil society and parliament-civil society relations through systematic, permanent and structured consultation mechanisms at a policy level."

RESOLUTION PROCESS: The progress report also mentions the ongoing resolution process to bring an end to the country's decades-long fight against terrorism by stating, "The government has expressed determination to bring an end to terrorism and to provide safe passage for members of the PKK (which is on the EU list of terrorist groups). The government's peace process was a turning point and met strong engagement from Turkey's Kurdish actors." The report also noted that the international community, including the European Union, is in support of this process and underlined the fact that the increase in public support has been of a measurable level.

FREEDOM OF EXPRESSION AND THE PRESS: The report did dish out criticism of the widespread self-censorship in place by media owners whose interests it stated, "goes far beyond the free circulation of information" and pointed out that state officials themselves have filed suits against critical journalists.

ERGENEKON TRIAL: The report also touched upon the ongoing Ergenekon trial for which it stated, "The ruling officially acknowledges the existence of a criminal network aiming to undermine the democratically-elected government." The report also notes that certain elements lacking in Turkey's judicial system were evident during this trial and therefore emphasized the fact that as a result certain segments of society do not accept the overall ruling.

GREEN LIGHT GIVEN FOR ALBANIAN CANDIDACY AND NEGOTIATIONS WITH MACEDONIA

'THREE CHAPTERS SHOULD BE OPENED'

As Fule announced the 2013 Progress Report on Turkey, the screen behind him referenced the opening of chapters in the nation's accession process and read "From 13 to 14 and onwards." Fule also called for the opening of three additional chapters, namely Chapter 22 on Regional Policy, Chapter 23 on "Judiciary and Fundamental Rights and Chapter 24 on Justice, Freedom and Security.

"European Union Minister and Chief Negotiator Egemen Bağış commented on Turkey's Progress Report by stating that he will share his views on the progress report following the Eid and mentioned that despite their insistence on the unfortunate timing, the report was still released during this holiday week.

'TURKEY IS A STRATEGIC PARTNER'

The Strategic Document announced in conjunction with the EU Commission's Progress Report emphasized the importance of ongoing cooperation and dialogue in the foreign policy arena. Describing Turkey as a strategically placed country, especially in terms of energy security, the document stated that the country plays a significant regional role. "Turkey is a candidate country and a strategy partner for the EU. With the country's expansive and dynamic economy, Turkey is an important trade partner for the EU," states the document, which noted that the best manner to best utilize the potential of EU-Turkey relations is through an active and credible accession framework. The document also notes that the start of dialogue on visa regulations paralleled to the signing of the readmission agreement will be the first step towards visa liberalization, which will gain new momentum for relations and will result in tangible benefits for both sides.

Emphasizing the important role Turkey plays in its foreign policy in the wider region as well as with neighboring Syria, the Strategy Document cited Turkey's support of the establishment of a united opposition and the significant role the country played in providing humanitarian aid to Syrians fleeing their own nation.