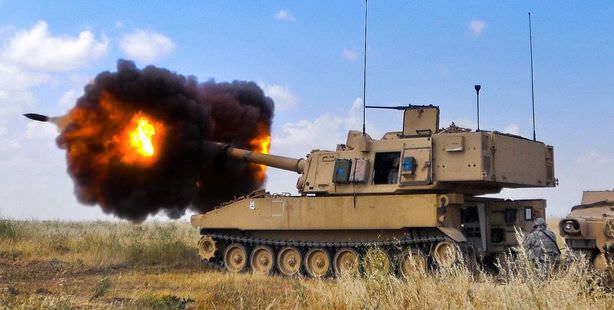 Turkey’s General Staff has announced that Turkey was struck with a mortar shell launched from the Azaz-Parsa Mountains region in Syria, however the mortar shell did not explode. The Turkish Armed Forces responded with a howitzer strike on locations belonging to the Al-Qaeda offshoot Islamic State of Iraq and Sham (ISIS) in Syria.

On Wednesday, the Turkish Armed Forces released a statement on its official website stating that on Tuesday, Turkey was struck with a mortar shell projected from Syria's Azaz-Parsa Mountains region at 13:30. The mortar shell, stated to have been launched by Al-Qaeda offshoot, the Islamic State of Iraq and Sham (ISIS), landed 450 meters east of the Demirışık Border Station in the Turkish southeastern province of Kilis, however did not explode.

The General Staff announcement stated that there were no casualties in the strike; however, the Turkish military responded by firing four rounds with two Storm (Fırtına) howitzers on Al-Qaeda affiliated ISIS targets in the Azaz-Parsa Muntains region.

Another statement released on the General Staff website stated that 85 members of Syria's North Storm Brigade (KKT), which had a previous hold on the Azaz region, defected to Turkey with their arms and turned themselves in to the Demirışık Frontier Post. The announcement stated that the KKT members who surrendered were disposed of their weapons and handed over to the Kilis District Gendarmerie Command.

The surrendered KKT members also shared information that the al-Tawhid Brigade has deployed tanks to the Es Salame border crossing, located across from Öncüpınar, Kilis and still in their control, as reinforcement.