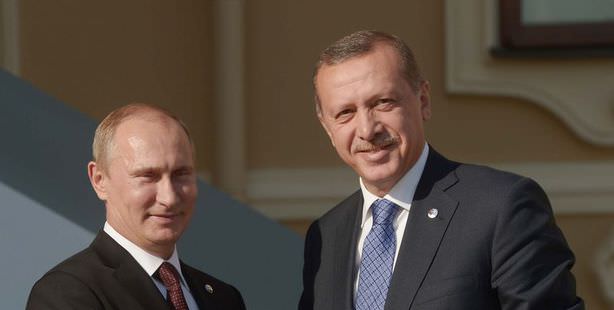 Prime Minister Erdoğan will be paying a visit to Russia at the end of November during which he is scheduled to meet with Russian President Putin for a discussion anticipated to be centered on Syria.

Prime Minister Recep Tayyip Erdoğan will be paying a visit to the Russian capital of Moscow on November 21-22 to take part in a High-Level Cooperation Council, which functions similarly to a joint council of ministers meeting between Russia and Turkey. Prime Minister Erdoğan, who is anticipated to depart for Moscow accompanied by a crowded delegation, will also take part in bipartite and inter-delegation meetings with Russian President Vladimir Putin. The situation in Syria as well as greater Middle East regional issues will be laid to the table during the meeting as will the issue of joint trade and investment relations between the nations.

In a recent interview with RİA Novosti, Russian Deputy Foreign Minister Alexei Meshkov mentioned the upcoming meeting between Erdoğan and Putin and said that Ankara and Moscow share the same objective of putting an immediate halt to the bloodshed in Syria. Discussing where the two nations' approaches differ, Meshkov stated, "Regional and international issues are just one branch of our cooperation with Turkey within a multidimensional framework. We are in dialogue with our Turkish partners on the issue of Syria. Yes, our approaches differ, however our objective is the same: putting an end to the bloodshed in Syria. Turkey is our close neighbor and an old and reliable partner of ours in the region. Our mutual cooperation which has progressed in a number of areas has in essence reached a new level. We are talking about a strategic partnership in a number of areas including energy."

Commenting on the high-level of joint relations between Turkey and Russia, Meshkov attributed the factor to the well-established mechanism of reciprocal dialogue in the nations' bilateral relations. Pointing out that the joint collaboration on the Mersin Akkuyu nuclear power plant is a significant project to attest to that fact, the Russian Deputy Foreign Minister stated, "There are a series of additional important projects such as the South Stream gas pipeline being realized. This pipeline will pass through Turkey's economic field in the Black Sea," said Meshkov adding that trade and economic cooperation works to increase regional relations.

ERDOĞAN ON THE METRO

Meanwhile, in other news, imagery of Prime Minister Erdoğan has been used for a widespread advertising campaign by Holland's Metro newspaper. The advertisement shows Erdoğan waiting for the metro seated alongside Tibet's exiled leader the Dalai Lama.