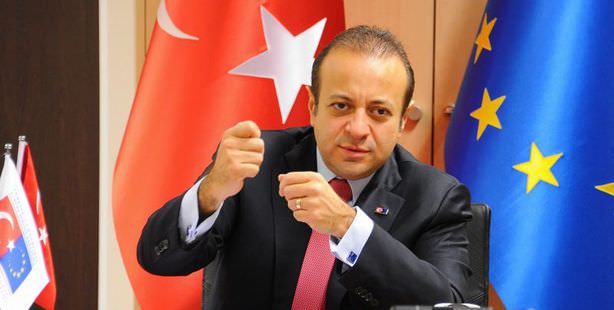 EU Minister and Chief Negotiator Egemen Bağış offered up his assessment of Turkey’s EU Progress Report over the weekend, as he said he would do after the Feast of Sacrifice holiday.

Turkey's EU Minister and Chief Negotiator Egemen Bağış commented on Turkey's EU Progress Report over the weekend, following the end of the Feast of Sacrifice (Kurban Bayram) holiday. Despite Turkey's request otherwise, the European Commission chose to release Turkey's 2013 Progress Report in the middle of perhaps the most sacred holiday celebrated in the nation, Eid al-Adha, otherwise known as the Feast of Sacrifice. Bağış had commented earlier in the week, that he would be responding to the items listed in the EU Progress Report on Wednesday, after the holiday.

On Saturday, Turkey's EU Minister and Chief Negotiator Egemen Bağış released a written statement in which he stated that the progress report released on Turkey was a "certificate of Turkey's determination to enact reforms" adding that Turkey is now closer than ever to European Union standards in democracy, human rights and economic development.

Noting that as is the case every year, Turkey will be paying close heed to the reasonable and constructive criticism offered up in this year's report, Bağış stated, "However, it should be well known that progress reports are not a report card for Turkey. The sole authority to give our government a report card is the nation."

Explaining that the EU has acted as a compass for Turkey during a number of dark times, Bağış said that the EU accession process has always blocked Turkey from deviating from the country's path towards modern civilization. Bağış said that during the past decade of AK Party rule, the EU accession process has truly become a benefit for the country as this has been a period of time which has long deserved to be considered one in which EU membership has become a concrete and realizable target. "It is due to our government's determination for reforms that the past train wrecks in the EU process have been forgotten," said Bağış.

A CERTIFICATE OF TURKEY'S DETERMINATION TO ENACT REFORMS

Commenting that Turkey is now indisputably closer to European Union standards in democratization, human rights and economic developments than it has ever been, Bağış stated, "It is pleasing that this was reflected on the overall letter and spirit of the 2013 progress report. The comprehensive reform efforts conducted by our government in a number of areas were reflected positively in the progress report." Bağış added that the EU Commission also commended the Democracy Package announced by Prime Minister Recep Tayyip Erdogan.

"It would not be inaccurate to describe the EU's 2013 Progress Report as a certificate of Turkey's determination to enact reforms. As the Progress Report states, our government is committed to the democratization process and reforms," said Bağış adding, "We will continue our ongoing reform and transformative perspective with the same determination we have exerted continuously for the past 11 years."

THE RESOLUTION PROCESS AND THE DEMOCRACY PACKAGE

Mentioning that the progress report referred to the ongoing resolution process in Turkey as being a turning point, and underlined the progress made in terms of cultural awareness and minorities, citing the return of property to minority foundations, Bağış stated, "Turkey is transforming, developing and changing its shell. The rooted reforms in the judiciary have become one of the most significant driving forces of this change." Bağış added that they have always emphasized that Turkey is not committed to these changes for the EU but is enacting these reforms and will continue to do so for the well-being and betterment of the nation's citizens.

In his statement, Bağış also pointed out that if progress reports were to be published on EU member nations; Turkey would be in a better position than many countries in terms of today's conditions, speed of reforms and the country's determination.

"The constructive criticism contained in the report will be a guide for our efforts to come," said EU Minister Bağış also pointing out that the opening of a number of chapters by the EU Commission has been delayed due to a lack of consensus amongst member nations. "Therefore, the deadlock experienced by the Commission in the accession process is not due to Turkey's lacking in technicalities, but is widely accepted to be a result of ambiguous political stances exerted by certain member-nations during this process." Bağış underlined that what matters most for Turkey is for the Commission to open the critical 23rd chapter on the judiciary and fundamental rights and the 24th chapter on justice, freedom and security to negotiations as soon as possible.