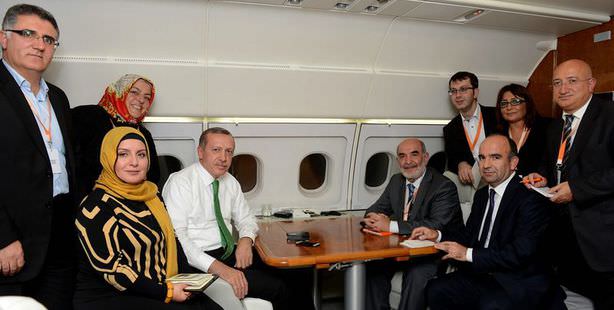 Prime Minister Erdoğan spoke to reporters on his return from Kosovo on pressing issues on Turkey’s agenda spanning from allegations against Turkey’s intelligence chief, the ongoing resolution process and the decision to opt for a Chinese long-range missile defense system.

Prime Minister Recep Tayyip Erdoğan responded to reporters' questions as he flew home from Kosovo where he took part in the opening of a new terminal at the Pristina International Airport by the Turkish- French Limak-Aeroports de Lyon consortium.

Asked to comment on why Turkey's National Intelligence Organization (MİT), and more precisely its Undersecretary Hakan Fidan, has been made a target recently, Prime Minister Erdoğan explained that in the period before they came to power, everyone was well aware of who was influencing MİT. "Practically everyone had influence on MİT, including both the nation's capital holders and media. Now they say, 'Everyone can be addressed for intelligence issues, including the media.' Yes, of course they can be in contact; however, what matters most is what follows. If what is being discussed affects the MİT and sways them according to their own benefits, then question marks will surface. If MİT is using the information they acquire from every segment they are in contact with for the betterment of their citizens and nation, then there are no issues," said Erdoğan.

The Prime Minister went on to point out that there are certain people who were uncomfortable with the new government when they first came into power for changing these tendencies that existed within MİT prior, because it did not work in their favor. "As you know, these attacks did not begin today. This has been a process that spans all the way back to the Oslo talks. Moreover, I am the one who assigns Hakan Fidan to these tasks. Therefore, if there are any questions, they should be directed to me. Hakan Fidan is my bureaucrat and he serves his nation with the orders I have given. While this should be congratulated, instead he is criticized and made a target."

Erdoğan praised Fidan for taking on a critical role in the resolution process and attributed its success to the intelligence chief's efforts, which he added Fidan conducted for the peace and harmony of this nation. Erdoğan also expressed his gratitude to the Wise Persons Commissions who travelled around the country as part of efforts to secure the happiness and peace of this nation. "As a result of these efforts, we were able to release the democracy package," said Erdoğan, adding that the community, the EU and the nation happily welcomed the reforms. The Prime Minister added that all administrative reforms have been completed and the legislative reforms have now been handed over to him and once he signs, will be transferred to the Assembly. "Hopefully, we will be able to take these steps in stride," said Erdoğan.

THE AK PARTY IS A GLOBAL PARTY

Prime Minister Erdoğan was also asked to comment on opposition to the AK Party expressed in the foreign press to which he responded, "We are a world party. When we set out on our path, we never said we would be Turkey's party, we always said we are a world party. There are theses being written about our party in universities right now. This is because we are not just figurants in the global agenda. We determine the agenda. We are a self-sufficient nation in this world. Our currency is being used in trade by countries such as Russia, Iran and China. This situation makes certain circles uncomfortable."

ON THE ONGOING RESOLUTION PROCESS…

PM Erdoğan reaffirmed his determination on resolving the PKK issue, however he said the debate over how many militants have retreated reveals an inconsistency within the terrorist organization. We will never be the side to break the ongoing resolution process," said Erdoğan adding that the discrepancy in the number of PKK members which have withdrawn shows there is a disconnect within the organization. "At first I announced that 15 percent of the organization had withdrawn and then I said it was actually 20 percent, which the BDP confirmed," stated Erdoğan.

PM Erdoğan explains why they selected the Chinese missile system

Reporters also asked Prime Minister Erdoğan to comment on the criticism from the West on Turkey opting to work with a Chinese firm for the production of the nation's long-term missile defense system.

Explaining that in making the decision to opt for the Chinese firm CPMIEC's system, they attributed a point system based on six to seven criteria including operational, price, co-production and sales to a third-part country, Erdoğan stated that they tally up the points of the proposed bids and the Defense Industry Undersecretary conducts the planning and presents the offer, on which they reach a decision. "The Chinese firm is the only one willing to co-produce the defense system and they submitted the lowest price. They are the most comfortable in terms of third-country sales and the French-Italian consortium cost one billion dollars more. They also were not interested in joint investment and opening up to third-party countries. The U.S. system cost 200 million dollars over their price, while the Russian system was an additional four billion dollars higher," said Erdoğan, adding that the Russian missile was the highest quality however, the bid lacked in three of the pre-established criteria.

Reporters asked Erdoğan if the deal was final, to which the Prime Minister responded that as the High Commission they have made their decision, however, he added; Turkey's Defense Industry Undersecretariat is now discussing the details with the Chinese side. "At this stage the only way the tender process will be halted will be if China decides to back down," said Erdoğan.

Reporters also asked Erdoğan if the Chinese missile system was compatible with NATO criteria to which the Prime Minister responded, "These missiles will definitely be produced in a manner that ensures compatibility with NATO standards. Our representatives will be part of these efforts starting from the laboratory stage. A year ago, we staged a joint drill with China, of which NATO is informed. We are in the deliberation stage and if there are no rifts then we will continue on."

This is a translation of an article originally written by Sevilay Yükselir.