PM Erdoğan: "The resolution process is not over" 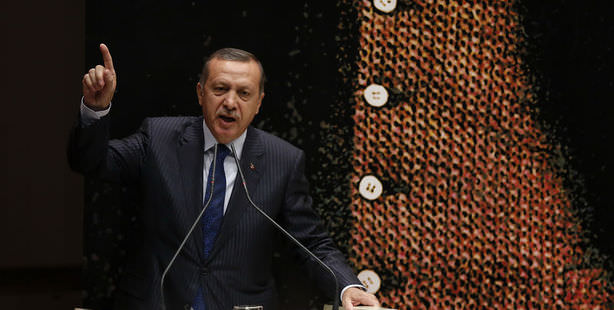 Prime Minister Erdoğan affirmed the government’s determination to continue the ongoing resolution process and delivered a series of pertinent messages at a meeting addressing AK Party provincial chairs on Friday.

Prime Minister Recep Tayyip Erdoğan addressed fellow party members at an expanded meeting of his ruling Justice and Development (AK) Party provincial chairs on Friday. Delivering a series of pertinent messages on the ongoing resolution process, the upcoming elections, and reforms, Erdoğan stated, "The resolution process is not over, it is continuing. Every step we take is an attribute to this."

THE CLIMATE OF PEACE CONTINUES

Calling on his Kurdish brothers to join him in putting an end to this game, Erdoğan stated, "The pain from the past is subsiding and the wounds are beginning to heal. Shutters in the east are no longer pulled down and mothers are no longer crying. The climate of peace continues in the region. We are courageously taking on the issues in this environment where weapons have been laid down. The residents of the region and all of Turkey have experienced a taste of this climate of spring. We will absolutely not allow this country to turn back. The people of the region will also not allow for those dark days to return," said Erdoğan adding that during the past Eid al-Adha all of the hotels in the southeast were full.

WE ARE CONNECTED AT A WHOLE OTHER LEVEL

"Issues of ethnicity have been making the agenda recently, with debates surfacing around what it means to be Turkish. There is only one answer to provide for this. Where was the poet Mehmet Akif Ersoy, who penned the national anthem from? His grandfather was a Kosovan Albanian. The ties that connect us are at a whole other level," said Erdoğan.

"The Turkish Republic does not belong to one status; it is the republic of a total 76 million people. Every citizen has the equal right of say over this republic. No one has the right to refer to our public as sheep. The Republic belongs just as much to the East as it does to the West. Those that are more modern, as are those that are conservative are just as much the owners of this republic as are those who choose to wear headscarves and those who do not," stated Erdoğan.

The Prime Minister also referred to demonstrations held under the slogans that democracy in Turkey was under threat and said, "This republic has seen the most damage from those who refer to themselves as republicans and not from those being referred to as anti-republic. They have even defended coups in the name of democracy," said Erdoğan.

Turkey has attained a level of maturity in democracy and its election system, stated Erdoğan adding that ever since 1950, elections have been upheld in a democratic manner in Turkey. "I dare those who accuse us of dictatorship to settle their accounts at the poll booths in five months' time. If there is a dictator in this country, then let them topple this dictator on March 30," said Erdoğan in reference to the local elections to take place in March, 2014. "Throughout our political careers, we have always believed in the poll booths. Despite the ruthless attacks of the media, we have always stood up for our nation and our beliefs. If the nation says go, then we will not stay on, however if the nation says stay, then we will not surrender our safeguard of this nation to anyone."