A project for peace and humanity 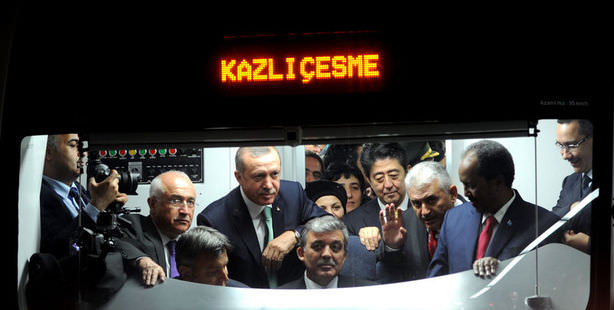 The highly anticipated Marmaray rail tunnel project was opened with a landmark ceremony held by Prime Minister Erdoğan and attended by a number of visiting world leaders as the first-ever undersea tunnel to connect two continents went into operation on a day coinciding with the 90th anniversary of the founding of the Turkish Republic.

The Marmaray undersea rail tunnel, which links the European and Asian sides of Istanbul, went into operation on Tuesday, October 29th, which was also the 90th anniversary of the founding of the Turkish Republic. In a grandiose ceremony attended by Prime Minister Recep Tayyip Erdoğan and President Abdullah Gül as well as Japanese Prime Minister Shinzo Abe, Romanian Prime Minister Victor Ponta and Somali President Sheikh Mahmud in addition to many other high-level state officials and foreign dignitaries, the new railway system which will connect the two continents of Europe and Asia underwater took its maiden journey on Tuesday.

The project which aims to reduce Istanbul's heavy traffic by transporting 75,000 passengers per hour and nearly one million daily and reduce travel time between the two sides of the Bosphorus down to just three minutes, was inaugurated in a ceremony held on Tuesday in Üsküdar Square, on the Anatolian side of the city. Following a series of speeches, including an address by Prime Minister Recep Tayyip Erdoğan, Turkish state officials and visiting foreign dignitaries were joined on a platform for a ribbon-cutting ceremony, which followed a short prayer by the head of Turkey's Religious Affairs Directorate Mehmet Görmez. The ceremony concluded with a maiden ride aboard a 13.6-kilometer section of a much longer planned rail system, which will run from Ayrılıkçeşme on the Asian side to Kazlıçeşme European side, beginning Wednesday.

Speaking at the inauguration ceremony, Prime Minister Erdoğan stated that this project, which is just one of many planned for the years leading up to the 100th anniversary of the establishment of the Republic, is not only one that links continent but also people. "This is the fulfillment of a 150-year-old dream. It reunites history with today, continents and also people and countries. The Marmaray is not only a project for Istanbul but a project for humanity."