PM Erdoğan: “We perpetuate a culture of consultation” 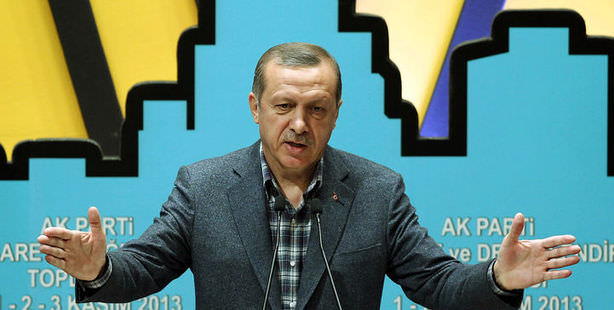 Addressing fellow party members at the closing session of a two-day AK Party Consultation and Evaluation meeting held in Kızılcahamam over the weekend, Prime Minister Erdoğan expressed that the government places high importance on giving life to counsel on all grounds and will continue to do so.

Prime Minister Recep Tayyip Erdoğan addressed fellow Justice and Development (AK) Party members at the closing session of the two-day "21st Consultation and Evaluation" meeting held in Kızılcahamam. Pointing out that this is the 21st such consultation meeting the AK Party has held since their 12 years of rule, Prime Minister Erdoğan stated, "Of course this is not our sole mechanism for consultation, from one on one meetings to party assemblies, from Assembly Group meetings to our congresses we take every opportunity to perpetuate a consultation culture and will continue to do so." Erdoğan emphasized that the AK Party is one in which consultation has been made a fundamental principle. Erdoğan also noted that they do not suffice to consult solely amongst one another and stated, "We come together with every segment of society, with those sharing all varieties of views and with anyone who has a voice and discusses current issues and the direction the nation is taking. We are trying to formulate a consulting and compromising culture," stated Erdoğan adding that they have determined a route through establishing a shared perspective in all areas as a result of meeting s held with a variety of outlets including civil society organizations, unions and Wise Persons' Commissions.

"CONSULTATION HAS BECOME A FUNDAMENTAL PRINCIPLE AND EVERY CRITICISM, HAS UNIQUE VALUE"

Reiterating that the Turkish government embraces all segments of society, Erdoğan stated, "In the history of the Republic and especially throughout our democratic history, there has never been another government that has paid this much heed, heard out and opened their hearts to different segments. Every remark, every opinion, every proposal and every criticism has a unique value for us. You can appreciate that a world where everybody shares the same opinion and formulates the same sentences would be an extremely boring, colorless and routine world."

Prime Minister Erdoğan stated that there is no doubt that as a party they have certain principles and policies, however, he said this is not an obstacle for hearing out other views. "We will continue to increase our dialogue and consultation amongst ourselves as well as all segments of society in order to defend the rights of not only those who vote for us, but also those who do not in order to further enrich our policies and to more sincerely embrace all segments of our society," stated Erdoğan.

Prime Minister Erdoğan also addressed the tragedy in Syria, which he referred to as part of a new series of 'Kerbalas' which are aching to the heart. "Over 130,000 people have been killed in the conflict in Syria, which has been ongoing for two years now. Over seven million people have been forced to abandon their homes. There are at present over 600,000 people residing as refugees in our country. Those forced to leave suffer in one way while those who remain in Syria suffer in a whole other way. There is a mini Kerbela transpiring in every corner of Syria every day," said Erdoğan in reference to the massacre of the Prophet Muhammad's grandson Hussein by the forces of Yazid.

In a reference to Syrian leader Assad, Erdoğan stated, "The Yazid in Damascus now is sending his own people, his own citizens to their death daily." Turkey cannot remain silent," emphasized Erdoğan who reiterated that their stance on the issue is clear. "Throughout history we have never been on the side of the Yazid's nor will we ever. We will continue to stand by the Hussein's of this world," said Erdoğan adding that this was in no way a Sunni-Shiite conflict but was entirely one based on what is right and wrong.

"RABIA IS NOW A GLOBAL SIGN SAYING 'NO' TO INJUSTICE"

Prime Minister Erdoğan also pointed out that the situation in Egypt does not solely pertain to Egyptians but is instead an issue of humanity, Erdoğan stated, "The Rabia sign is not solely the sign of the righteous case of the Egyptian public. The Rabia sign has now become worldwide in its meaning of saying 'stop' to injustice. The Rabia sign is now a sign saying 'enough' to all oppression, pressure, deaths and massacres throughout the world. It is now the world's sign saying no to coups and massacres," said Erdoğan.

The Prime Minister vowed that Turkey will continue to support only the righteous no matter what religion, ethnicity, language, skin color and especially sect a person is attributed to. "Turkey will never be impartial and will always stand by those who are just. Those who are impartial are swept aside. I have expressed numerous times that if the coup had been staged against those in Tahrir Square, then Turkey would have undoubtedly supported their rights. Turkey will also always defend those who have come into power through elections and will only support their departure through elections," said Erdoğan.