CHP takes a step back leaving 60 articles on the shelf 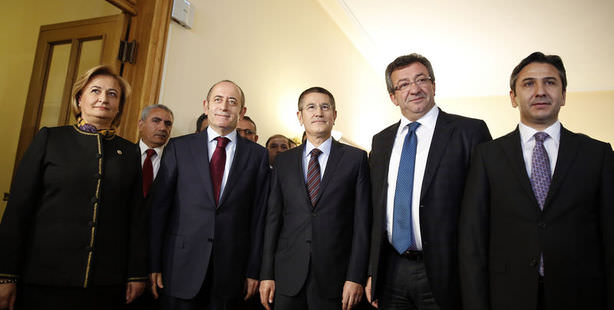 Main opposition party CHP has brought on the conditions of a “four-party agreement” in regards to the adoption of 60 articles previously agreed on by the Constitution Conciliation Commission. While CHP Deputy Hamzaçebi stated, “When four people do the cooking only two people do not eat,” AK Party Deputy Canikli said the decision meant the deal “was over.”

The ruling Justice and Development (AK) Party's proposal to bring 60 articles agreed on by the Constitution Conciliation Commission up for parliamentary approval may have been shelved by the main opposition Republican People's Party. CHP Group Deputy Chairmen Akif Hamzaçebi and Engin Altay paid a visit to AK Party Group Deputy Chairmen Nurettin Canikli, Ahmet Aydın and Belma Satır to relay their views on the proposal to present the previously agreed upon 60 articles to a Parliament vote.

During the approximately 50-minute meeting, the CHP lawmakers insisted that the passing of the 60 articles based on a consensus reached by the AK Party and CHP would jeopardize the future of the Constitution Conciliation Commission. The CHP deputies also requested assurance from the AK Party that if the aforementioned 60 articles were to be adopted it would not result in the dispersing of the Constitution Conciliation Commission.

CHP Deputy Hamzaçebi used the term, "When four people cook, only two people do not eat," in expressing their demands for the four-party consensus reached in the Conciliation Committee to also be sought by the General Assembly.

Both Prime Minister Recep Tayyip Erdoğan and CHP leader Kemal Kılıçdaroğlu announced last month that they were ready for the 60 articles to be put to a parliamentary vote, however the opposition Nationalist Movement Party (MHP) opposed presenting a 60-article package and pushed instead for the legislation of a new Constitution as originally planned.

"THIS ISSUE IS OVER NOW"

In an announcement made following the meeting, Hamzaçebi stated, "We could legislate this package as four political parties. We could also include the issue of legislative immunity and detained deputies."

AK Party's Canikli expressed that CHPs response meant terminating the efforts sought by the charter panel and stated, "With MHP's stance of closing the door on the issue, it seems that the condition of seeking a four-party consensus on adopting the 60 articles that a consensus was reached on means that there is no way they will be passed. It is not just us; no one is expecting the commission to produce new articles. At this current rate, it would take 10 to 15 years to draft a new constitution and even that is no guarantee. It seems this issue is over," said Canikli.

Meanwhile, the CHP is expected to present a proposal for a temporary article to be included in the constitution on jailed deputies.

This is a translation of an article originally written by Evrin Guvendik.