Erdoğan says sheltering al-Qaeda “out of the question” 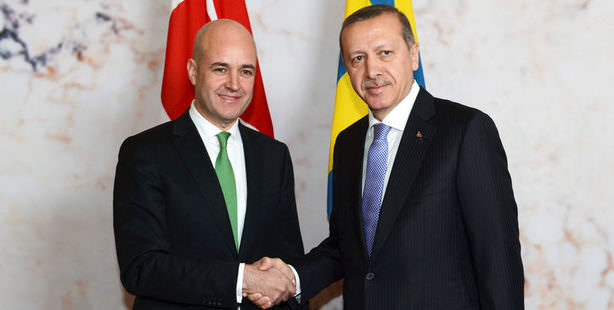 Prime Minister Erdoğan flatly denied what he called slanderous allegations that Turkey is aiding al-Qaeda in Syria and stated that Turkey would apprehend the organization the same way it does the PKK. Erdoğan also commented on Turkey’s EU progress and referred to a new era with Cyprus under what he called the “Ban Ki-moon” plan.

Prime Minister Recep Tayyip Erdoğan flatly denied claims he said were 'slanderous' that al-Qaeda has been using Turkey's border as a transit area to access Syria. Addressing the issue at a press conference held with Swedish Prime Minister Frendrik Reinfeldt, Erdoğan assured that Turkey would handle al-Qaeda in the exact same manner it deals with the PKK terrorist organization.

When asked to comment on the increasing presence of jihadist groups along the Syrian border and to explain the use of Turkey as a transit area for these groups, Erdoğan refuted the question and asked the reporter which group he was referring to and whether he could document these claims. "It is completely out of the question that organizations such as al-Qaeda and al-Nusra could be harbored in our nation. Quite the contrary, in any developments in regards to these organizations, they have been subjected to the same measures we take against separatist terrorist organizations. Turkey has no ties with any nation involved with the Syria-affiliated al-Qaeda and has always ostracized them," stated Erdoğan.

Prime Minister Erdoğan acknowledged that Turkey is in contact with the Free Syrian Army, which he said the entire world has also recognized. Erdoğan added that Turkey is also in contact with the Syrian National Coalition, through which they deliver humanitarian aid. "We have offered over $2 billion in aid, whereas external aid has totaled $135 million. With our open-door policy, we will continue to support the Syrian refugees that enter Turkey. However, it is completely out of the question that we would harbor or protect extremist groups, these are lies and this is all slander," stated Erdoğan.

When asked to comment on the blockages of certain chapters required to be fulfilled for EU membership, Prime Minister Erdoğan stated, "The political obstacles put forth in front of 16 different chapters greatly saddens us. We are ready for these blockages to be lifted. We have studied our lessons well and have the capabilities and strength to overcome these issues. We are closely following the corporatization of the EU. If there were no political obstacles, we would be able to swiftly overcome all of this."

Erdoğan also commented on embarking on a new era in the Cyprus issue and explained that during a meeting with UN Secretary-General Ban Ki-moon in St. Petersburg, he stated that as guarantor countries they could all play an active role in negotiations to put an end to this issue. "As long as the South Cypriot administration is on board, then we could prompt the Turkish Republic of Northern Cyprus (TRNC) in the same manner," stated Erdoğan adding that if Greece and South Cyprus are also given the same recommendations then they could reap results on the issue under the leadership of the UN Secretary-General. "There was an Annan Plan that was shelved, however, now we will be establishing a Ban Ki-moon plan. Let's create this plan and reach a solution," said Erdoğan.

Swedish Prime Minister Reinfeldt expressed their determination to progress their strategic partnership on environmental and energy issues and stated, "I hope that the 23rd and 24th chapters will be opened. We have always placed high importance on Turkey joining the EU." Reinfeldt also emphasized their intentions for progress on the visa situation for Turks and stated, "Turkey has made democratic progress." Commending the recently released democracy package, the Swedish Prime Minister stated, "The PKK is a terrorist organization and we do not feel that a solution will be reached through violence. Erdoğan's government has taken significant strides for its Kurdish public, which is the way to diminish tension. We are extremely pleased to see that the tension has indeed decreased."

"Turkey is on the right path"

Swedish Foreign Minister Carl Bildt penned an article on Prime Minister Erdoğan's official visit to Stockholm, which emphasized that Turkey is on the right path. Published in the local Dagens Industri newspaper, and entitled, "Erdoğan's Turkey is on the right path," Bildt writes that the reforms made in the country in recent years has brought Turkey even closer to the West. Bildt points out that Kurdish is now being taught in schools in Turkey, that the weapons have been silenced in the Southeast, the military guardianship curtailed and the resolution process is on par. "A new Turkey has been born under Erdoğan's leadership", states Bildt, adding that the new Marmaray project could be considered a part of the new Silk Road. The Swedish Foreign Minister also stated that the visa regulations implemented by the EU onTurkey creates a negative image and is a practice that needs to be lifted. "We need Turkey in order to ensure more effective cooperation between NATO and the EU," wrote Bildt.

During his stay in Stockholm, Prime Minister Erdoğan also took the opportunity to meet with representatives from the Assyrian community that emigrated from Turkey to Sweden. Calling on the community to return to their homeland of Turkey, Erdoğan heard out the representatives of the Assyrian community in Sweden, which totals nearly 120,000. "We have also suffered greatly from the poor administrations of the past and their anti-democratic processes. However, our steps towards democratization continues and the situations in the past are no longer. We would like you to return to your country and your homeland," were the messages delivered by Erdoğan.

Assyrian community representative Yusuf Etin, expressed how pleased they were to have the opportunity to meet with Erdoğan and stated, "We are greatly pleased by the steps taken for the Assyrian community."

In the evening, Erdoğan met with Swedish King Carl 16 at the royal palace after which he flew on to Poland by a private Turkish Airlines aircraft.