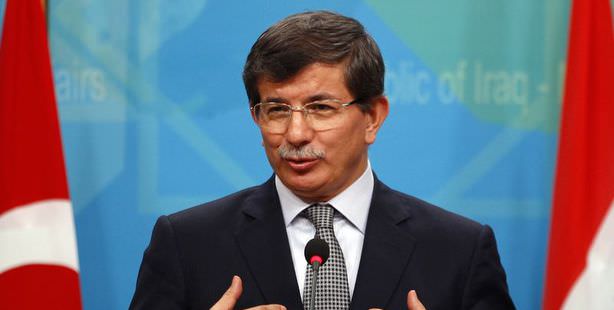 On his way to pay a visit with the intent of furthering harmony in Turkish-Iraqi relations, Foreign Minister Davutoğlu stated, “There is a political moderation in Iraq that needs to be supported.”

While en route to Baghdad on Sunday, Foreign Minister Ahmet Davutoğlu gave an evaluation for reporters ahead of his two-day critical trip to Iraq. Explaining that relations between Turkey and Iraq seem to be getting back on track, Davutoğlu stated, "We are opening a new page with Iraq."

Emphasizing that Shiite-Sunni tension now poses the greatest threat in the region, Davutoğlu stated, "After a stagnant period in Turkey-Iraq relations, great efforts are now being made to overcome this situation." The Foreign Minister stated that from here on out, reciprocal meetings are scheduled for practically every month, including plans for Maliki to visit Turkey in two months time. "We have gained a rhythm in relations and the Maliki-Barzani and Maliki Nujayfi meetings created the positive groundwork for a softening of the tension and a new rhythm in relations.

"Turkey will provide all forms of support in order to facilitate the April 30 elections in Iraq. We have not excluded anyone in our relations, including the regional administration in Iraq," said Davutoğlu. "What we would hope for is that the elections conclude with a result that is vision-based for the future and not based on ethnic and sectarian coalitions. It would not be right for Iraq or the region for any segment to be excluded. There is a political moderation in Iraq that needs to be supported," said Davutoğlu pointing out that it must not be said that either Turkey or Iraq are taking a step back. "Some say, 'Turkey is revising its foreign policy'. No, we didn't do anything that could have caused a halt in our relations," stated Davutoğlu, adding that what this could be called is the turning of a new page in relations with Iraq.

"We perceive the creation of a political structure that includes all sects and ethnic groups in Iraq as being a deterrent factor in the Shiite-Sunni conflict in the region. If there is sectarian peace in Iraq it will also spread to the region," said Davutoğlu warning however, that if the conflict in Syria is reflected on Iraq, it could lead the way to an unstoppable process.

Explaining that after holding a series of meetings on Sunday, on the second day of his trip he plans to visit Najaf and Karbala and meet with Grand Ayatollah Ali al-Husayni al-Sistani, Davutoğlu stated, "This is the month of Muharrem; therefore there is symbolic meaning to these visits."

Davutoğlu also remarked on Turkey's trade-economic relations with the Northern Iraq administration by stating that in no way has the central administration's right been overlooked and added that they have not in any way overstepped the constitutional framework. There are projects, which include the central government on transferring the energy resources in south and southeastern Iraq to the global market, projects which he said would offer a better balance.

Turkey and Iraq have embarked on this new era of repairing ties on their own volition explained Davutoğlu adding that although America will be pleased by this development, there has in no way been any outside prompting or advice given on their behalf. "This is a process that was initiated by the messages relayed during Nujayfi's Ankara visit."

Davutoğlu expressed that Turkey always wants to engage in close dialogue with Iraq on issues pertaining to the struggle against terrorism and stated, "When the resolution process reaches its stage of completion, there should no longer remain anyone armed in Turkey or in Iraq. I hope the Iraq government would also be pleased with these results."

ONE ON ONE WITH MALIKI

Davutoğlu also had the opportunity to meet with Iraqi Vice President Khodair al-Khozaei and Iraqi Deputy Prime Minister Saleh al-Mutlaq, during which he emphasized the importance of his visit in terms of both bilateral as well as regional relations. "We have lived together throughout history and we will continue to live together throughout eternity," stated Davutoğlu. Announcing that a new era has begun in Turkey-Iraq relations, Deputy PM Mutlaq stated, "This visit exhibits a new restructuring in our bilateral relations."

At a joint press conference held with his Iraqi counterpart Hoshyar Zebari, Davutoğlu stated, "There has been enough bloodshed in our region. There are no limits to our relations and cooperation with Iraq."
Commenting on the situation in Syria and more specifically Assad, Davutoğlu stated, "History has never seen this destructive a tyrant on his own people." In regards to allegations Turkey is aiding radical groups in Syria, Davutoğlu stated, "There is absolutely no aid going to radical groups in the camps in Turkey or in Syria. We will not tolerate violence in Turkey nor or on the soil of our surroundings. Turkey has never and in absolutely no way stood behind pro-violence groups."

Iraqi Foreign Minister Zebari expressed that Iraq has established extremely privileged relations with Turkey and noted that they are against the transferring of weapons from Iran to Syria over Iraqi territory. Zebari underlined that this is not something they will allow and that they have relayed their stance on the issue to Iran. Zebari also added that as a result they have increased control on airplanes arriving from both Syria and Iran.