Licensing made mandatory for recreational fishing 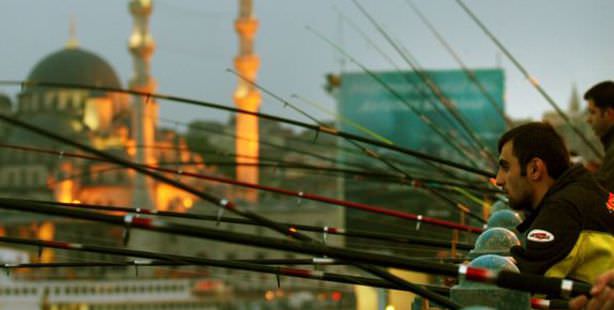 Those who enjoy recreational fishing off Istanbul’s historical Golden Horn will now have to obtain licenses from the Ministry of Agriculture and Livestock. Those who do not have the proper paperwork will be subject to pay a 200-lira fine.

The Ministry of Food, Agriculture and Livestock has completed new draft regulations for their 'Sea Products Legislation', which is geared towards the field of fisheries. According to the new draft, recreational fishing conducted by those between the ages of 18 to 60 will be subject to obtain licensing from the Ministry of Food, Agriculture and Livestock. Recreational fishermen who go out to fish from lakes or along the seashore with rods or hobby fisherman that fish with boats will be obliged to seek prior licensing from the Ministry. Those who violate the new regulations will be subject to a 200 lira fine.

'THE BOUNDARIES NEED TO BE DEFINED'

According to Amateur Fishing Association member Kahraman Melek, the boundaries of the article, which will also restrict recreational fishing in a number of popular locations throughout Istanbul, including off of the Golden Horn, need to be defined in the legislation on fishery, which is being finalized according to a number of expert evaluations, otherwise the framework will remain too comprehensive. "This sort of document is especially important when it comes to inland waters. However, I also feel that it is important that this sort of licensing, which will be issued after receiving training, not be transformed into some sort of opportunity for monetary gains," stated Melek.

The new draft law to be implemented by the Ministry of Food, Agriculture and Livestock, includes required training for recreational fishermen in order to receive licensing. Those who complete a mandatory course will then be eligible for licensing which will grant them permission to fish anywhere they choose. According to information obtained by the ministry's bureaucrats, the main purpose for the new legislation is to register and protect fish species.

The following are a series of additional regulations to be included in the new draft legislation:

ERA OF DIPLOMA-HOLDER FISHERMEN: Ship-owners will be required to employ personnel that have at least a diploma from a two-year degree.

ELECTRONIC RECORDING DEVICES ON THE WAY: It will be made mandatory for fishermen to obtain a recording ledger or similar electronic device to track the fishery products caught.

LICENSING REQUIRED FOR RECREATIONAL FISHING: Recreational fishermen between the ages of 18 to 60 will be required to obtain licenses from the Ministry of Food, Agriculture and Livestock.

FISHING VIA ELECTROSHOCK PROHIBITED: While using electroshock devices will be entirely prohibited in fishing, the use of all forms of explosives, poison, narcotic materials or caustic lime will also be forbidden.

BOTH ENGLAND AND THE USA ISSUE FISHING LICENSES

Licensing regulations for recreational fishing are implemented in a number of nations. In England and Northern Ireland, children under the age of 12 are not subject to license requirements; however, those between the ages of 12 to 18 are charged five pounds. Adults are charged 27 pounds a year for licenses to fish nonmigratory fish and sea food products, while licensing to fish for products in these categories cost up to 72 pounds. Although it differs amongst the states, in many in the U.S., recreational fishing without a license is prohibited. While there is no charge for licenses for those under the age of 16, adults are charged 22 dollars annually to obtain the necessary paperwork to fish.