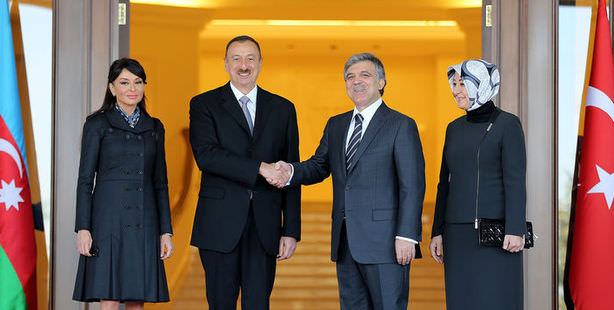 President Abdullah Gül and his Azerbaijani counterpart Ilham Aliyev presented one another with State Medals in a fortification of friendly ties between the nations on Tuesday.

In a very special ceremony held at the Çankaya Palace in Ankara, President Abdullah Gül and his Azerbaijani counterpart Ilham Aliyev presented one another with State Medals of Honor as a sign of camaraderie and solidarity.

Paying his first official international visit, since winning the elections, to Turkey, Azerbaijani President Ilham Aliyev was welcomed with an official ceremony to the Çankaya Palace in Ankara. After their mutual national anthems were played, President Gül presented Aliyev with the Turkish state Medal of Honor, while Aliyez reciprocated the gesture by presenting Gül with the Heydar Aliyev medal.

Speaking after the ceremony, President Gül expressed how pleased he was to be considered deserving of the Heydar Aliyev award and stated, "We place high importance on continuing our relations based on friendly, brotherly and neighborly ties at the highest level. During this era of global and regional upheaval, the presence of a leader who will transport Azerbaijan to safe harbors is an assurance of our future relations."President Gül added that through swiftly completing the Baku-Tbilisi-Ceyhan and Baku-Tbilisi-Erzurum energy projects as well as the Baku-Tbilisi-Kars railway and the Trans-Anatolian Pipeline (TANAP) , they hope to add new success stories to their repertoire and stated, "Ever since you came into power in Azerbaijan, you have exerted great efforts in ensuring the deepening of brotherly relations between our nations. Through these superior efforts you have taken relations to an exceptional level in the history of Turkey-Azerbaijan ties."

Azerbaijani President Ilham Aliyev, who was recently reelected for a third term, expressed that this is his 16th visit to Turkey and stated, "'I am extremely pleased to witness Turkey's progress each time I visit. Turkey being a regional power prides us just as much as you." Emphasizing that President Abdullah Gül has played a great role in Turkey's development, Aliyev expressed how pleased he was to be given a State Medal of Honor. "Turkey is our closest friendly, brotherly and allied nation," said Aliyev adding that Turkey-Azerbaijan cooperation and friendship is permanent.

Tuesday's ceremony held at the Çankaya Palace was also attended by Prime Minister Recep Tayyip Erdoğan, Foreign Minister Ahmet Davutoğlu and Energy and Natural Resources Minister Taner Yıldız, who were all joined by their spouses.