PM Erdoğan says they will not allow attempts to sow discord 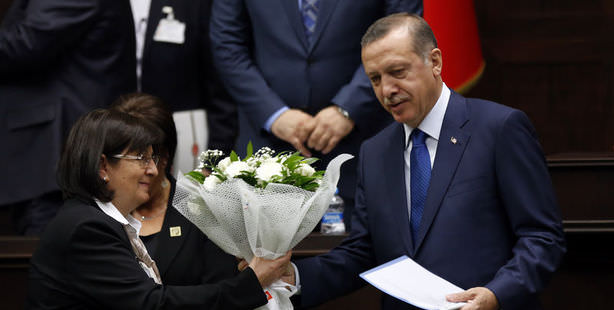 Those who are unable to compete with the AK Party in the polls are now trying to sow discord Prime Minister Erdoğan stated on Tuesday, adding, “We will not grant such opportunities to those ready to pounce.”

Prime Minister Recep Tayyip Erdoğan delivered a series of significant messages regarding misunderstandings being rectified through dialogue within his ruling Justice and Development (AK) Party during a parliamentary group meeting following the recently surfaced debate on co-ed housing for students.

LET US NOT HARBOR EXPLOITERS AMONGST US: "Painful events such as the Dersim, Çorum, Kahramanmaraş, Sivas and Gazi Neighborhood incidents, which have transpired in recent history, could not tear apart our 1,000-year history of brotherhood," said Erdoğan. "Let us not allow exploiters and those pursuing power to harbor amongst us. Let us not except the exploitative policies of those terrorist organizations pursuing militant strength, which only consider Alevis for their votes," added the Prime Minister.

THIS IS NOT INTERVENTION, IT IS NORMALIZATION: Erdoğan also remarked on the pressure that has been exerted on Turkish society for 200 years now. The nation was not given options, pointed out Erdoğan, instead they were told what was right and wrong. "What was right according to them was enforced through a state understanding based on national pressure, violence and despotism. If this nation is only now acquiring all of the rights you have had for 200 years, then this is not an intervention of your life style, it is instead equality, freedom, democratization and normalization. Just because certain people are unable to stomach this, does not mean that we will back down from our conservative, democratic identity.

THEY ARE WAITING IN AMBUSH: "Those who understand they will not be able to compete with the AK Party in the polls, are now embarking on other efforts. Those who have lost any hope of coming to power through working hard and achieving the nation's support are now quite literally lying in ambush and awaiting to pursue other expectations," said Erdoğan. They hope not for the AK Party to lose in the polls, added Erdoğan, they want there to be a rift within the AK Party, "They pray for the AK Party to become divided and weakened," which Erdoğan said is a pathetic situation. "However, the AK Party will never grant an opportunity for these wishes to fruition. I believe that none of my brothers in this party or cause will ever give hope to these poor souls," said Erdoğan.

AS THE JOINDER OF PARTIES, WE WILL TALK AMONGST OURSELVES: "There may be misunderstandings and miscommunication from time to time," stated Erdoğan, "However as the joinder of parties and as a requirement in the law of brotherhood, we will discuss these matters amongst ourselves and will settle the issue. We have been doing so since August 14, 2001. We have solved issues amongst ourselves and within the framework of the law of brotherhood. No one should have any doubt that from here on out we will discuss these issues amongst ourselves and will seek out a solution together. We will not grant such opportunities to those ready to pounce and wringing their hands in anticipation. I believe from the bottom of my heart, that every friend, and brother of mine at every level of this organization will act with responsibility and will not give the enemy this satisfaction," said Erdoğan.

ON SARIGÜL JOINING CHP: Prime Minister Erdoğan also commented on the recent joining of Şişli Mayor Mustafa Sarigul to the main opposition CHP by stating, "On the one hand you discharge him based on a file of illegalities and then you glue on to him like a life saver. What sort of logic is this? This may be normal or in the genes of the opposition party, however we are not a cadre based on a union of profiting. We are a cadre made up of fellow party members with shared destinies that are linked together as brothers."

FAREWELL TO SAVAŞ AY: During his delivery at Tuesday's AK Party group parliamentary meeting, Erdoğan also commemorated renowned journalist Savaş Ay, who passed away earlier this week. "We have lost Savaş Ay, a very valuable journalist that was brought up by Turkey. I want to offer my condolences to the media world and hope for God's mercy and grace for Savaş Ay, who is someone I have worked with since my time as Istanbul Mayor.

WE WILL NOT LET OUR GOVERNOR BE SACRIFICED: Upon exiting the parliamentary group meeting, Prime Minister Erdoğan responded to a question regarding Adana Governor Hüseyin Avni Coş, who is said to have hurled a profanity at a protester, by stating, "Of course I do not find that type of response to be appropriate. That is why I have delivered the necessary orders to our Minister of Interior. They will conduct the necessary investigation. However, no offense, but we will not allow our governors to be easily sacrificed by these types of provocative actions."

Deputy Prime Minister Bülent Arınç was unable to attend Tuesday's AK Party group meeting. According to the information obtained, a scheduled visit to the Navy Command ran late and therefore instead of interrupting the meeting, when he arrived late, he decided to watch the remainder of the session from his office.