Is Davutoglu’s visit to Iraq a new page in relations? 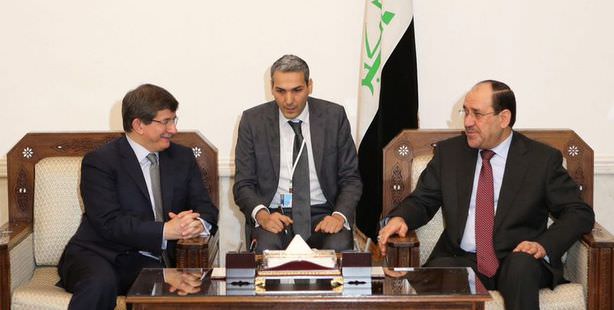 Turkey’s close relations with Iraqi Shiites may well help to reduce the sectarian tension and sooth the crisis in the region.

The relations between the Turkish and the Iraqi central governments have been strained by the culmination of a series of events within the past few years. The alleged Turkish support to the anti-Maliki Iraqi political alliance during and after the 2010 Iraqi general elections, improved close relations between Turkey and the KRG without the latter seeking Baghdat's approval, Turkey's support to the Iraqi political actors whom Maliki wanted to get rid of, and events in Syria that replaced both countries on the side of conflicting political sides in the country were among the factors that contributed to the escalation of tensions between the two governments that strained relations. However, the crisis in Syria and the escalation of sectarian violence in Iraq have made very clear to all actors in the region that they do not have much to gain from the polarization that further contributes to the instability in the region.

Efforts to find a solution to the Syrian crisis that at least partially satisfies all parties before it becomes too dangerous for everyone and initiatives between Iran under the Rouhani rule and the U.S. to find a compromise point for Iran's nuclear enrichment program created a suitable atmosphere for other countries to seek a new common ground to work together on the basis of mutual interests. In this regard, Turkish Foreign Minister Ahmet Davutoglu's visit to Iraq a few days ago was of utmost importance.

During his visit to Iraq, Davutoglu did not content himself with official meetings with Iraqi government officials. Despite his security council's advise to not go to Karbala due to security issues, he decided to go ahead. He did so in a country where even the capital city is still somewhat as if it is in a civil war, with checkpoints on every corner. Even the Green Zone is no longer entirely safe. Under the extraordinary security measures, Davutoğlu's convoy visited the Sunni and Shiite districts of Baghdad and the Shiite holy cities of Najaf and Karbala, in the middle of the month of Muharrem. There is no doubt that Davutoglu's comprehensive visit to Iraq was timely and necessary during this time when talk of regional sectarian war is in the air everywhere.

As also stated by Turkish authorities, there is no doubt about the attempts to drag Turkey into an evolving regional sectarian conflict. There are efforts both inside and outside Turkey to perpetuate the impression that Turkey is in support of Sunni extremist groups inside Syria. This impression was being used by the Iranian and Iraqi government authorities in their deep involvement in the Syrian crisis. Davutoğlu's visit to the two cities aimed at sending the right signal on where Turkey stands on the sectarian divergence in the region. Davutoglu wanted to show that the Turkish government is not favoring any side in a sectarian fight which would be disastrous to regional stability. The part of the message Turkey wanted to send was to show that it was to the mutual interests of every state in the Muslim World to not play with the fire of ethnic and sectarian fighting.

In addition to sending this multi-purpose message to the region and international community, his meeting with al-Maliki was very crucial to erase deepened mistrust on both sides and open a new page for cooperation between the two countries. It seems that the visit was successful in its near-term goals. Davutoglu said that Al-Maliki proposed Turkey build a south-north pipeline to transport Iraqi oil and natural gas to world markets via Turkish territory.

If realized, this would be a very important development in terms of strengthening interdependence and mutual trust and confidence not only between two countries but also between Shiite and Sunni populations in the area.

In the past, the Iraqi government had issued licenses for Turkish companies in the oil-rich southern region of Iraq. Nevertheless, subsequent political problems distrupted mutual efforts to further develop economic cooperation. Maliki's offer is not something Turkey can ignore because, as Davutoglu says, "This kind of mutual dependence is also an assurance of Turkey's security".

As in the case of integrative economic cooperation between Turkey and the KRG, in the forthcoming period, Turkey has to focus on prioritizing projects that will further integrate Turkey and Iraq both economically and culturally. This will also lay foundations of regional peace, unity and will create an environment of cooperation to resolve problems within the region without asking for the interference of actors who want to create a sphere of influence in the region. In addition to efforts to create new opportunities for increased economic relations, Davutoglu's meetings with Ayetullah Ali Sistani and Shiite leaders Muqteda El Sadr and Ammar El Hekim were also very important.

It is obvious that Turkey's close relations with Iraqi Shiites may well help to reduce the sectarian tension and sooth the crisis in the region. Before the Syrian crisis, the Turkish government had an advantageous position in this regard in the region. However, during the crises, all sides in the area failed in taking the necessary steps to prevent misunderstanding and an escalation of the crisis due to misjudgement and wrongful evaluation of the situation. Turkey still has more of an advantage than other actors in the region to ease sectarian tension. Davutoglu's visit, therefore, was very important and timely to move on in the right direction to create a new atmosphere of understanding and cooperation.