Resolution process to be crowned in Diyarbakır 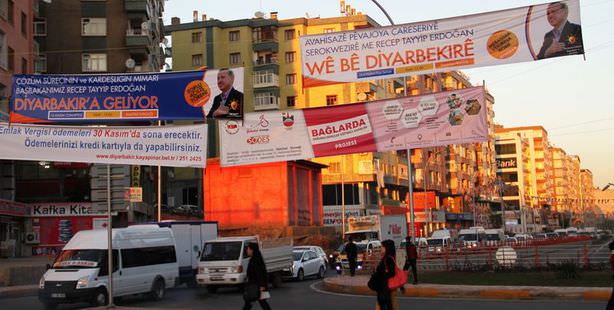 Prime Minister Erdoğan says his plans to visit the southeastern province of Diyarbakir over the weekend, will be a historical occasion that will crown the ongoing resolution process. Revealing plans to meet with Northern Iraq’s regional government leader Barzani, to host a number of facility openings and a mass wedding ceremony for 300 as well as a legendary concert performed by the İbrahim Tatlises and Şivan Perver duo, Erdoğan stated, “Our greatest hope is for this to be an occasion of peace and solidarity for the regional public.”

Prime Minister Recep Tayyip Erdoğan says this weekend's plans to meet with Northern Iraq's Regional Government leader Massoud Barzani in Diyarbakir and to witness Ibrahim Tatlises and Şivan Perver on stage together as they perform a duet for a mass wedding ceremony for 300 couples will be "a historical occasion that will crown the resolution process."

Prime Minister Erdoğan explained his vision of the historical weekend that awaits the southeastern province of Diyarbakir during a press conference held with Azerbaijani President Ilham Aliyev on Wednesday. "We will experience a historical process this weekend in Diyarbakir," stated Erdoğan, explaining that in addition to taking part in a number of openings they will also be hosting a mass wedding ceremony for 300 couples. "We wanted this mass ceremony to be realized in a very unique manner, by also inviting Massoud Barzani, and for it to be a crowning of the resolution process. Then we also said, 'let's bring two great friends such as İbrahim Tatlıses and Şivan Perver together.' After a grave tragedy, this will be the first time that Mr. İbrahim will be taking the stage here and he will be performing a duet with Şivan Perver," explained Erdoğan.

AN OCCASION FOR HAPPINESS

Prime Minister Erdoğan also shared plans to hold political discussions with Massoud Barzani, the leader of the regional administration in Northern Iraq. Pointing out that he had the opportunity to hold positive discussions with Nechirvan Barzani during the latter's visit a while back, Erdoğan stated that this time he will not only be holding discussions with the Northern Iraq Regional Administration leader Barzani, but they will both be attending the weekend's ceremonies together. In addition to Saturday's grandiose plans, there will also be a series of openings held in Bismil and Ergani on Sunday, added Erdoğan, stating, "With our minister and deputy comrades we will all together be embracing the Diyarbakir public. Our entire desire is for the regional public to love one another in peace and solidarity as part of the resolution process and especially on this very special day, the tenth day of the month of Muharrem, which in of itself has given us a whole other occasion for happiness to be experiencing all of this now."

A NEW ERA WITH IRAQ

Prime Minister Erdoğan also mentioned that following a visit by Speaker of Council of Representatives of Iraq Nujayfi, Iraqi Foreign Minister Hoshyar Zebari also paid a visit to Turkey. "Our Foreign Minister Ahmet Davutoğlu also realized an extremely productive trip to Iraq recently. From here on out, our Speaker of the Assembly will be paying a visit after which Maliki will be coming to Turkey," state Erdoğan adding that they will soon be restarting Turkey-Iraq High Level Strategic Council meetings. "After which I will be making a reciprocal visit. I believe that these trips will make a significant contribution to regional peace. We will be continuing this process with a whole new revival," stated Erdoğan.

DİYARBAKIR PREPARES FOR A HISTORICAL DAY

Deputy Prime Minister Bülent Arınç has also been invited to this weekend's festivities in Diyarbakir, which is the largest Kurdish populated province in the southeast region of Turkey. The province is in full force preparation mode for the festivities scheduled for November 16 and 17, with billboards and signs being put and local newspapers printing advertisements in Turkish, Kurdish and Zazaki heralding the development, which is widely perceived as being a contribution to the ongoing resolution process which aims to put an end to a decades-long conflict between PKK terrorists and security forces. Local newspapers printed advertisements with the headlines, "We embrace the main architect of the resolution process." Billboards contained statements made by Erdoğan and messages welcoming his arrival, which marks the first time the Prime Minister will be paying an overnight trip in Diyarbakir since taking on his position.

SUPPORT FROM THE REGION FOR THIS WEEKEND'S IMPORTANT MEETING

Diyarbakir residents have responded positively to the upcoming meeting between the Northern Iraq Regional Administration leader Barzani and Prime Minister Tayyip Erdoğan. The shared perception in the region is that this historical meeting will be a contribution to the ongoing peace process. A number of democratic mass organizations have expressed their sentiments as follows:

Alican Ebedinoğlu (Chair of the Trade and Craftsmen Chamber): "Mr. Barzani's arrival is extremely significant. We hope it will be a contribution to the process. We will be presenting a report we have prepared to the Prime Minister."

Ebubekir Bal (Diyarbakır Commodity Exchange Chairman): "These types of high level meetings were held in Ankara in the past. The fact that Diyarbakir has been selected for this meeting is extremely significant."

Hakan Akbal (Southeast Young Businessmen Association Chairman): "We foresee this meeting to be positive in both economic terms as well as in terms of being a contribution to the process. Their bilateral messages will create a new atmosphere in the region."

Tahir Elçi (Diyarbakır Bar Association President): "The fact that this meeting will be taking place during this era in which peace talks are being held and hopes of a solution are increased is important. We are expecting Barzani to also meet with Kurdish establishments and representatives."

Alaaddin Korkutata (Entrepreneurial Businessmen Association Chair): "The Prime Minister wants to deliver the ongoing message of the resolution process through a widespread geography that extends all the way to Northern Iraq. "

Raci Bilici (Human Rights Foundation Department Chair): "We believe that the messages that will be delivered, and especially Mr. Barzani's messages on the Kurdish issue, will be extremely significant."

This is a translation of an article originally written by Hüseyin Kaçar.