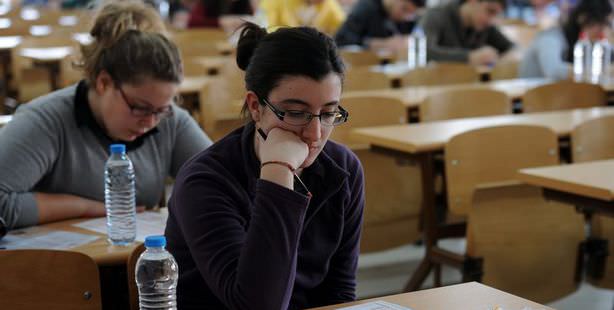 A project to turn preparatory schools into private schools aims to prevent “dershanes”, which are educational institutions that tutor students for the national university entrance exam, from turning into alternatives to schools themselves and to save parents from being obliged to enroll their children into these sorts of institutions.

The government is nearing the final stage of a project ruled on in 2009 geared towards providing incentives for 'dershanes', private university exam preparatory institutions, into private schools. This transformation will be predicated on facilitating a painless transformation period and to ensure that both prep school owners and teachers are not victimized in the transition. For this very purpose, a three-dimensional model, which will be implemented in the upcoming 2014-2015 school year, aims to prevent preparatory schools from turning into alternatives to standard education and to save parents from being obliged to enroll their students into these sorts of extracurricular institutions.

* INCENTIVES TO TRANSITION INTO PRIVATE SCHOOLS: Preparatory schools that do not have the financial means or physical capabilities to easily allow their transition into private schools will either be allocated property or given loans. The Ministry of National Education aims to increase the share for private education based on student numbers in formal education from 2.76 percent up to five percent, allocated from the total budget devoted to general education.

* A SOFTENING OF CRITERIA: Due to the limited number of prep schools that have the physical capabilities of being transformed into private schools, the Education Ministry will be granted lenience on private school criteria. A number of finer detailed criteria, such as door-width measurements and sink heights will be given more flexibility in the initial stages. Schools that complete the three-year transition period will then be required to fulfill the mandatory criteria.

* 2,000 PREP SCHOOLS ON BOARD: According to initial inspections conducted by the ministry, between 250 to 300 schools were determined able to immediately transition into private schools. It was also established that over half of the prep schools that do not currently meet the standards for a transition into private schools do indeed want to undergo the transformation. In this case, nearly 2,000 prep schools may be granted additional time to adopt the minimum standards and criteria.

* STUDENTS GUARANTEED: The National Education Ministry's efforts to transform preparatory schools into private education institutions includes a stipulation that transitioned institutions be guaranteed students. According to the plan being prepared in conjunction with the Ministry of Finance, the quotas for these newly established schools will be filled with successful yet underprivileged students. This system will not only fulfill the schools financing demands but it will also allow for successful underprivileged students to receive scholarships.

* NO NEED TO FILL QUOTA: The prep schools will be given an assurance for students, thereby lifting the concern of how they will draw in students once they have undergone the transition to a private school. Either the unmet quota will be filled by the National Education Ministry or additional payments will be made per student.

* TEACHERS WILL NOT BE MADE AGGRIEVED: The concern that teachers will remain jobless as prep schools transition into private schools will also be no longer. The teachers employed at prep schools will be given priority employment at the soon-to-be established private schools. Any teachers that remain unemployed through this process, will be assigned to schools by the National Education Ministry.

* THE WHOLE WORLD PROMOTES IT: A number of nations provide a variety of special incentives for private schools. Such support includes paying student's fees, paying teacher salaries, tax exemption, exemption from social security payments or investments and student expenditures being made tax write-offs; measures which are in place in countries like Germany, Holland, Spain, Australia, Norway, Sweden, India and the United States.

The National Education Ministry has announced that an article released in Zaman daily, entitled "Shutting down prep schools a blow to free enterprise, education' misdirected the public. According to the ministry announcement, the article in Zaman newspaper and another report broadcasted on the Samanyolu News Channel, entitled "An Era of Authoritarianism in Education," contained factitious elements and therefore appeared to be misdirecting the public on the ministry's legislation efforts. The announcement also stated that a systematic campaign is being waged in social media based on these factitious reports.

The announcement went on to state that the ongoing efforts to rectify certain issues in the education system was being conducted within the framework of the necessities for a democratic state of law. "The ministry is working on drafting legislation that will provide certain incentives to facilitate the transition from prep schools into private schools," read the statement which added, "In our ongoing efforts the factors we are paying the most attention to is ensuring that employees, teachers and parents in prep schools do not suffer any grievances and to ensure these preparatory schools transition into private schools to have a more influential position in national education as well as to eradicate the dependency on these sorts of extracurricular educational institutions."

The statement also addressed certain allegations in the aforementioned reports claiming prep schools may be subject to fines, that authoritarian practices will be brought on and that prep schools who publish advertisements or brochures will be subjected to financial sanctions, as being completely fictitious and provocative and underlined that they are absolutely in no way included in the draft text.

'This issue has been debated for 15 years now'

Minister of National Education Nabi Avcı discussed the developments surrounding closing down private schools on the news channel aHaber. Explaining that the issue of shutting down prep schools is not a new subject, Avcı stated that it is an issue that has been discussed in Turkey for 15 years now. Expressing that they aim to have transitioned at least 70 percent of preparatory schools into private schools by 2014, Avcı stated that these prep schools harm the reputation of educational institutions and pointed out that the money dished out to these tutoring schools are a complete waste.