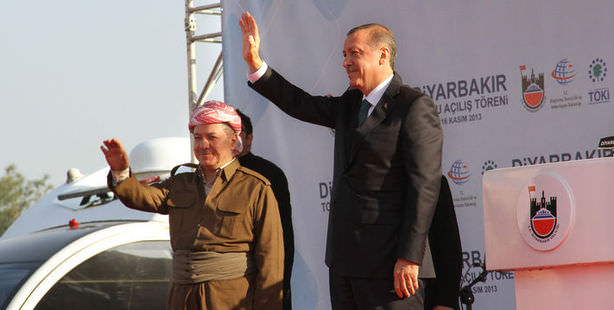 Prime Minister Erdoğan and the leader of the Northern Iraq autonomous administration Barzani met in Diyarbakir on Saturday in a momentous visit to the southeastern province. Addressing the crowds at a joint opening ceremony, Barzani expressed his full support for the ongoing resolution process in Turkey.

The leader of the Northern Iraq regional government Masoud Barzani arrived to Diyarbakır on Saturday for a historical meeting with Prime Minister Recep Tayyip Erdoğan. Addressing the crowds at a joint opening ceremony, Barzani stated, "This is the time to create a new history. I am extremely pleased. No one has ever benefitted from war. I want to thank Recep Tayyip Erdoğan very much for courageously laying the foundation for peace. I want my Kurdish and Turkish brothers to support this peace project. We fully support the resolution process and will continue to do so," said Barzani adding, "We could not have done something like this 15 years ago."

Musical legends Şivan Perwer and İbrahim Tatlıses also took the stage with Perwer, for whom this arrival marks the first time the Kurdish singer has returned to his homeland in 37 years, stating, "Diversities will no longer be forbidden. Prime Minister Erdoğan has added a significant yeast to clean milk and today we celebrity friendship and fraternity."

Tatlıses stated, "I hold whomever shoulders the responsibility for peace in high esteem. My brother Şivan and I have not arrived to Diyarbakır for glory and fame. The only thing we are wanting for is peace."
Meanwhile, the crowds excitingly await Erdoğan's delivery.

Erdoğan and Barzani meet at the Diyarbakır Governorship

Prime Minister Erdoğan started his momentous Diyarbakır trip by paying a visit to the city municipality where he met with Diyarbakır Mayor Osman Baydemir. Commenting on the historical meeting, Erdoğan stated, "I hope this visit of ours will be a milestone for our fraternity."

Diyarbakır Mayor Osman Baydemir commented on the visit to the A Haber news channel by stating, "We welcomed Mr. Prime Minister in our Diyarbakır, a city of peace and brotherhood. We had an extremely productive and pleasant meeting. I hope that it will serve to the establishment of ultimate peace, which is what we are all in immediate need of."