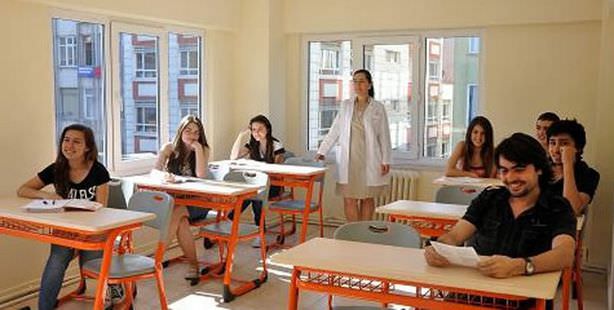 The draft law, which will be presented to the Council of Ministers on Monday consists of a three-prong transformation for ‘dershanes’, which are competitive high-school and university exam prep schools. The specific tutorial educational institutions will be given two years to transition into operating as private standard schools.

The National Education Ministry has prepared a new draft resolution that will instill rooted reforms to the nation's education system, spanning from "teacher's preferences and appointments, from a restructuring of the ministry's organization to the transition of prep schools into private schools. The draft includes a three-prong transformation for 'dershane' prep schools, career planning for teachers and a new working system in national education.

SABAH has acquired the finer details of the draft resolution National Education Minister Nabi Avcı will be presenting to Monday's, November 18 Council of Ministers meeting.

The following are a series of headings from the new framework for education reform:

* INCENTIVES FOR TRANSITIONING INTO PRIVATE SCHOOLS: Dershanes', which Prime Minister Tayyip Erdoğan has announced lead to injustices in education, will no longer operate as exam preparation schools after the 2013-2014 school year and will transition into private schools. Prep schools that apply to the National Education Ministry by June 30, 2014 will be allowed to transition into private education institutions. Prep schools that meet the criteria for transitioning into private schools will be granted incentives by the Council of Ministers that may include the allocation of property, tax exemptions and low interest loans.

* A TWO-YEAR TRANSITION: For those prep schools that want to transition into becoming private schools yet do not fit the required criteria, a two-year transition period will be granted. Within this framework, these prep schools will be able to obtain temporary permission to operate as an education institute under the stipulation that they will work towards fulfilling the mandatory criteria within the timeframe granted.

* AN OPEN SCHOOL FORMULA FOR PREP SCHOOLS: Prep schools that are unable to immediately transition to becoming a private school will be granted 'open high school" status. While students attending "open high schools" are simply given books by the state, according to the new regulations, students enrolled in "open high schools" will be obliged to attend a certain amount of physical classroom time, which these establishments could serve as. The state would then rent out these former prep school locations for this very purpose.

* PREP SCHOOL TEACHERS TO BE TRANSFERRED TO STATE SCHOOLS: Teachers employed at prep schools will be employed by the state, once they close down. Through a verbal exam and a mandatory five years behind their belts, these teachers will be appointed to positions based on staff needs by the National Education Ministry.

* FREE PUBLIC TUTORING CENTERS: The state will be setting up Public Tutoring Centers for high school graduates or others preparing to take the university placement exam. These courses will be offered to all students free of charge.

* MINORITY SCHOOLS TO BE OPEN TO EVERYONE: Within the framework of the democratization program, and for minority communities to be completely integrated with society, all citizens will be eligible to attend minority schools, which will no longer be limited to minority community applicants.