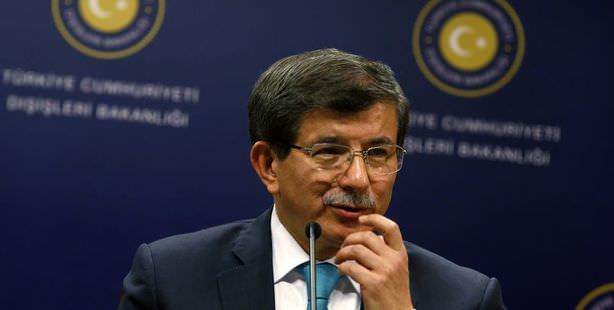 In a recent articled penned for Foreign Policy, Foreign Minister Davutoğlu writes, “The United States and Turkey do not have the luxury of remaining aloof or apart from each other, “adding on Syria; “We will not become casualties of the ongoing psychological war.”

Foreign Minister Ahmet Davutoğlu penned a recent article for Foreign Policy magazine entitled "With the Middle East in crisis, U.S. and Turkey must deepen alliance" ahead of a U.S. trip, which begins Monday. Foreign Minister Davutoğlu expressed that he does not concur with the perception of increasing distance between the U.S. and its Middle East allies and writes, "Turkey and the U.S. have long been, and will continue to be, close allies."

"In today's ever more complex and fluid international environment - with Syria in crisis and much of the Middle East in flux - the U.S.-Turkish relationship remains vital for a sustainable regional and global order," writes Davutoğlu.

The Foreign Policy article was released two days ahead of Davutoğlu's November 17-18 Washington D.C. trip, upon invitation by his U.S. counterpart John Kerry and where he is also scheduled to meet with U.S. Defense Secretary Chuck Hagel.

"The partnership between the United States and Turkey is value-based, founded upon universal principles of fundamental rights and democratic norms. Alignment with the West during times of crisis, such as the Arab Spring, is testament to how deeply such shared values are embedded in the genesis of our foreign policy. On that ground, the United States and Turkey do not have the luxury of remaining aloof or apart from each other; our joint work has proven indispensable to regional security and stability," states Davutoğlu.

Stressing his belief that Turkey could play a more constructive role in shaping the future of Europe, Davutoğlu notes in the article that NATO is the cornerstone of Turkey's security policy. The Foreign Minister also expressed that Turkey welcomes and supports Obama's engagement with Iran, and added, "The possibility of a diplomatic settlement of the dispute over Iran's nuclear program raises hopes for peace and stability in the region. Turkey has been among the few to actively pursue such a course and will continue to advocate this crucial initiative."

'WE WILL NOT BECOME CASUALTIES'

Foreign Minister Davutoğlu also touched upon the civil war in Syria by writing, "In Syria, progress toward the elimination of Bashar al-Assad's chemical weapons is a step in the right direction, but there is still more to be done. Turkey will continue to extend its full support to the Syrian people until a political transition is achieved and the rule of cruel despotism comes to an end. We will not become casualties of the ongoing psychological war that in vain tries to identify the Syrian people's legitimate resistance with the dark forces of terrorism."

With a heavy agenda ahead, Foreign Minister Ahmet Davutoğlu begins a two-day visit to the U.S. on Monday, which will be followed by a trip to Russia to attend the Turkey-Russia High Level Strategic Cooperation Council meeting on Nov. 21-22 in a delegation led by Prime Minister Recep Tayyip Erdoğan. Then on November 26-27, Davutoğlu heads to Iran to participate in an Economic Cooperation Organization meeting.