“No one is losing Turkey, it is only becoming more beautiful” says Perwer 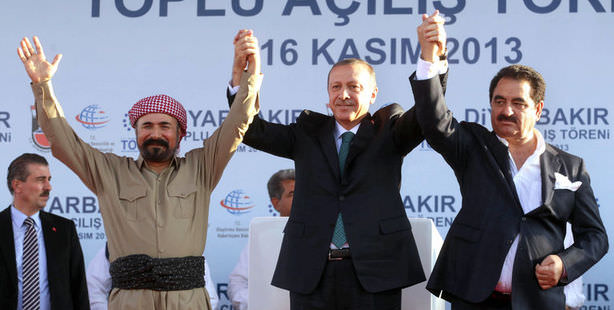 Speaking to reporters in Diyarbakır, legendary musician Şivan Perwer stated, “No one is losing Turkey, it is becoming democratized.” Perwer, for whom this was the first return to his homeland in 37 years, was overcome with emotions during the press conference.

Returning to Diyarbakır for the first time in 37 years of exile and by invitation by Prime Minister Recep Tayyip Erdoğan and KRG leader Masoud Barzani, Kurdish performer Şivan Perwer, was unable to hold back his tears while sharing with reporters his initial impressions upon arriving to his homeland.

Şivan Perwer took the stage during a momentous opening ceremony held in Diyarbakır on Saturday and later that day performed a duet concert with Ibrahim Tatlises at a mass wedding ceremony.
In an exchange of farewells at a Diyarbakir hotel, Perwer said to Prime Minister, "What you have done has been a great service, I congratulate you. I will stand by you in your valuable efforts."

Sharing his emotions upon returning to his homeland after 37 years in exile, Perwer stated, "One would wish that I could go out onto the streets of Diyarbakır to embrace my public. I have lived with this longing. However, this does not just happen all at once. When it comes to processes, they happen stage by stage."

Perwer also commented on critics of the momentous meeting in Diyarbakır by stating, "No one is losing Turkey; it is becoming democratized and more beautiful." Perwer expressed that he would love to perform concerts in Diyarbakır especially, but also in locations throughout Izmir to Hakkâri.

Perwer was overcome with emotions when he said, "We are on the side of peace and brotherhood. We are always in service of peace, whether it be from Kandil to Ankara or Baghdad to Damascus."

Barzani and Perwer travelled on by highway from Diyarbakır to Şırnak, where they were greeted with displays of love from local residents as they passed through Silopi. As traffic was halted due to the crowds, citizens proceeded to lift the vehicle transporting Perwer in celebration.

This is a translation of article originally written by Hazal Ateş.