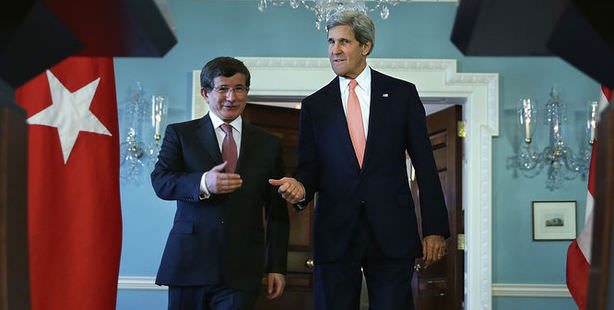 On the first day of his U.S. visit, Foreign Minister Davutoğlu had the opportunity to meet with his U.S. counterpart John Kerry as well as Defense Secretary Hagel in an effort to reaffirm the strong ties between allies the U.S. and Turkey.

Foreign Minister Ahmet Davutoğlu began a two-day visit to Washington D.C. on Monday, on behalf of an invitation by his U.S. counterpart John Kerry. In addition to meeting the U.S. Secretary of State and holding a press conference that followed, Davutoğlu also met with Defense Secretary Chuck Hagel as well as delivered an address to the Brookings Institute.

During the press conference held with U.S. Secretary of State John Kerry, Foreign Minister Davutoğlu was asked to respond to a question of whether he thought Washington had sent mixed signals to Ankara in regards to the crisis with Syria, to which Davutoğlu replied, "Since we have a sincere dialogue and consultation, there are no mixed or non-mixed signals." Davutoğlu shared that at times discourse can become frank, which he attributed to the fact that they are not only working for their nations but also for regional and global peace, which he added is a collaboration that will continue forever between Turkey and the United States.

Kerry emphasized that Turkey and the U.S. share strategic goals when it comes to challenges such as Syria, Iran, the Middle East peace process, the future of NATO and economic prosperity and stated, "I think there are only a few countries – you can count them on one or two hands – who work on as many issues together as effectively as we are working on them. And we are both stronger when we tackle these challenges and create opportunities together."

In addition to discussing the situation in Syria and Iran's nuclear program, Kerry also commended Turkey for its ongoing resolution process to put an end to the long-standing Kurdish issue by stating, "The United States is particularly encouraged by the historic Kurdish peace process and the recent announcement by Turkey of several domestic reforms. Implementing these changes will spur greater openness and greater freedom in Turkish society, which the Foreign Minister and the Prime Minister completely embrace, and which we encourage them and commit to working with them in order to try to promote going forward."

The U.S. Secretary of State also commended Turkey for the nation's "remarkable generosity in hosting over 600,000 Syrian refugees now, as well as its vaccination program for 1 million children that they just announced today," stated Kerry.

The end of the Kurdish issue as a domestic threat

Davutoğlu, who also met with Defense Secretary Chuck Hagel, delivered an address at the Brookings Institution in Washington on Monday. During his speech, Davutoğlu recalled an interesting exchange he had with Kurdish musician Şivan Perwer, who returned to his hometown of Diyarbakır for the first time in 37 years, by invitation by Prime Minister Erdoğan and KRG leader Masoud Barzani for a momentous weekend on joint inaugurations and a mass wedding ceremony. "I sat right next to Şivan on the bus. I apologized because of all the wrong policies that had kept him away from his country," said Davutoğlu adding that he also told the musician that he could be granted Turkish citizenship any time he wants.
In reference to the momentous meeting held in the Southeastern province over the weekend, which brought Prime Minister Erdoğan and KRG leader Barzani together, Davutoğlu hailed the historical gathering as "a declaration of the end of the Kurdish issue as a domestic threat."

During the meeting between Davutoğlu and U.S. Defense Secretary Hagel, the latter announced that Washington has decided to extend the deployment of the Patriot missile system batteries along Turkey's border upon Ankara's request for an additional year.