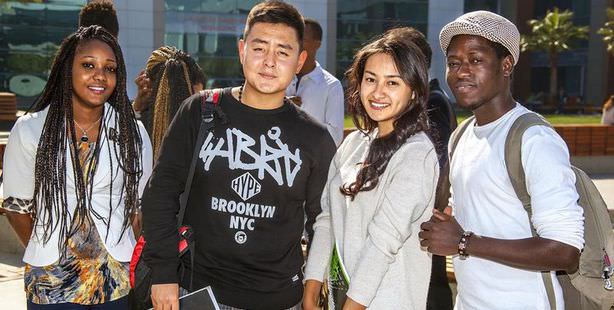 Various incentives given by the Turkish government in the past few years have succeeded in increasing the number of foreign students studying at Turkish universities.

Turkey's growing economic clout, together with the increasing cultural influence exerted by the expanding tourism and entertainment sectors, has turned the country into a force to reckon with.

Historically Turkey has been at the crossroads between the East and the West. It is no surprise that most international students in Turkey come from countries where Turkey's diplomatic, economic and cultural influence is on the rise. And this is reflected in the growing number of international residents in Turkey's largest cities.

Dr. Sean Cox, the Director of the Office of International Affairs of Istanbul's Bahcesehir University, said, "Turkey has modernized and developed economically over the past decade, the lifestyle reputation of the country has grown – Turkey is a fun, and interesting, place to live, and it appeals to young people from a variety of cultural backgrounds."

While their reasons for residing in Turkey vary, when asked it becomes evident that most have come to Turkey seeking higher education.

According to the Foreign Economic Relations Board's (DEİK) Business Education Council estimates, this trend will continue in the near future, with the number expected to increase up to 100,000 by 2015.
Experts believe one factor that produced this increase is the easing of past restrictions that prevented foreign students from studying in Turkey.

The Coordinator of the Department of International Relations at Istanbul Sehir University, Yasemin Kilit Aklar, said the abolition of the International Student Exam administered by the Organization for Higher Education (YOK) had allowed private universities to determine their own admission criteria for foreign students.

Cox also pointed out the increasing restrictions imposed on prospective students by Western European and North American countries as another factor boosting Turkey's chances in attracting potential overseas students. Turkish universities boosting their overseas marketing budgets coupled with increasing tuition fees of the universities in the West had also allowed Turkey to increase its share of the lucrative international tertiary education market.

"Government policies, which in the past restricted the ability of international students to enroll in degree programs in Turkey, have been eased, allowing more students from more countries the opportunity to earn degrees from Turkish universities" said Cox, adding that with many private universities offering students programs in the English language, Turkey has become internationally competitive.

Turkey's attractiveness as a provider of higher education was most recently made visible on Nov.5 by 140,000 foreign students applying for 5,000 scholarships offered by the Turkish government.

James Halliday, the International Coordinator for Strategic Advancement at İstanbul's Koc University, said "Turkey is becoming a new hub for world-class education. The number of international students studying in Turkey has increased considerably in the last five years" and noted that the government spending 22 percent of the gross national budget on education has a lot to do with these new standards.

"Accreditations and memberships to prestigious consortia and networks has enabled leading Turkish universities to gain a solid place in the higher education landscape globally" continued Halliday.

"I enjoy having international students at my school, I believe that they make the school better resemble the real world. They bring with them their culture and their experiences, and we can learn allot from them", said Temim Hocaoglu, a Turkish student studying in Istanbul.

Sehir University's Yasemin Aklar said, "The best advertisements for our universities are done by our enrolled students. One of the best examples of this is Sehir. In the first year we had 26 international students, 56 in the second, and 109 in the third. This year our 109 international students brought in 210 new students, because the students are content with their schools and the country they study in."

Students that choose Turkey as their destination are pleased with their experience within the country, the encourage those they know from their native lands to seek education in Turkey. This further adds to the process of diversification within nation's universities, as stated by; "I have been studying in Istanbul for 3 years. I was impressed by the level of education here and with the life standards, so I encouraged my brother who just graduated from high school to apply to universities in Turkey. He did, and now he is studying in Istanbul. He believes that he made the right decision choosing to study here" said Nadia Arar who came to study in Turkey from Palestine.