PM Erdoğan: “One cannot do great things when thinking small” 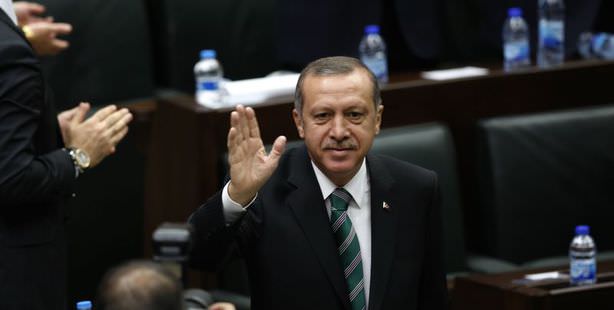 Prime Minister Erdoğan ruled out the possibility of a general amnesty and responded to reactions of his use of the word “Kurdistan” by stating, “Those who are afraid of words cannot build great nations.”

"Was Mustafa Kemal a separatist"

During Erdoğan's parliamentary speech on Tuesday, the Prime Minister also addressed the response to his use of the word "Kurdistan" during a delivery at a momentous inauguration ceremony held in Diyarbakır on Saturday. Erdoğan pointed out that the word was used in assembly proceedings in Turkey's first parliament as well as by the founder of the Turkish Republic Mustafa Kemal Ataturk. "If you look in the proceedings from that assembly you will see the "Kurdish" word used, as you will also see the words, Georgian, Laz, Arab and Bosnian. If they look back at Ottoman times, they will see there are a southeast and a Kurdistan state. This is the legacy that was handed over to us in history. You cannot overlook this. Turkey's recent history is not the history drawn up by the MHP and the CHP. Yet what do they say to us, 'use this term'. Well then, was Mustafa Kemal a separatist? Were the parliamentarians at that time that also used the word Kurdistan also separatists," asked Erdoğan.

Turkey is not an introverted country, said Erdoğan adding, "Those who are afraid of words and concepts and of the taboos and nightmares they orchestrated themselves will not be able to build a great country. You cannot do great things when thinking small. They were afraid of languages so they forbade them. They were afraid of songs, cassettes and records, so they forbade them. A great country cannot have these sorts of fears."

Prime Minister Erdoğan said it was time to break free from the preconceptions that a song, a statement or a different way of addressing will divide this country and stated, "Whatever we have done thus far has been in the name of normalizing Turkey. We are not taking anything away from the Turks and giving it to the Kurds. Nor are we taking anything away from the Turks that we are giving to the Georgians, the Circassians or the Romans. We are not making concessions for anyone, nor are we taking away anyone's rights." Erdoğan called on his brothers by stating, "We have lived altogether for a thousand years in order to understand one another and to experience each other's pain and happiness. I am just saying that those in the nation's north, south and east should try to understand the pain suffered."